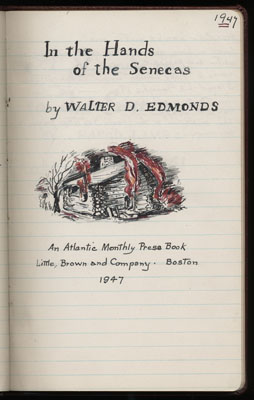 Volume XVIII, the final volume of Lillian’s collecting journals, is unfinished. Though she leaves the end date of the cover blank, the final entry is dated 1947. The volume likely remains incomplete because of the collection’s donation to the University of Virginia Library. Begun when she was 81 years old, she writes, “This day of brilliant sunshine, March 23rd, 1946. I begin a new year, by entering my first book for 1946. ‘The Bulwark’ by Theodore Dreiser.”

One of her final entries—for Walter D. Edmonds’s In the Hands of the Senecas—revisits many of the issues Lillian has grappled with throughout the collecting journals, including what qualifies as a bestseller and should therefore be included in the collection. She also comments on the general literary taste of her day and what’s happening around her house as she writes. The title page illustration for this entry is remarkable, considering that Lillian was 82 when she drew it. The entry reads as follows: “I put it in as a thrilling historical tale. Well done, and too decent to be a best-seller. […] (It is March 8. (Saturday afternoon) I draw my picture etc. up in the library. ‘Walküre,’ magnificently sung. My cabin afire is appropriate. Melchoir is singing, and it is being enjoyed in many households. Downstairs my maids are listening. No work Saturday afternoons.)”

It is not surprising that the collecting journals come to an end shortly after this entry. In 1945 the University of Virginia began to prepare the Taylor Room in Alderman Library, which was to replicate Bob and Lillian’s study and house her collection upon its transfer to the University. According to a pamphlet on the Taylor Room, the gift of the collection was announced in 1950, and the transfer was officially recorded four years later. Today the collection is housed in the Small Special Collections Library, and some of the furniture from the Taylor’s home can be found in the Taylor Alcove, at the top of the stairs in Harrison-Small.