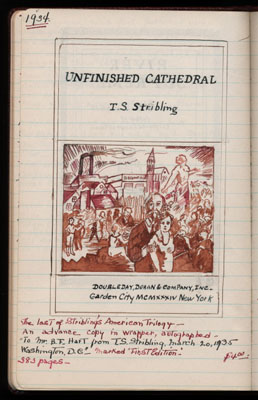 By the time Lillian began her entries for Volume XV, she had a very strong opinion about the literature of the early 1930s—she either liked or disliked things greatly. Of Marc Connelly’s play The Green Pastures, for instance, she writes, “A remarkable performance. Deeply impressive, the choir singing the Negro spirituals like the chorus of the Greek plays. It affected me as much if not more than Oberammergau […] I have never been more stirred in the theatre—In fact, I forgot it was the theatre.” Gertrude Stein, however, strikes another note. She writes about Lucy Church Amiably, “I have tried twice to read it. Cannot. I think it is a joke that Gertrude Stein put over on the public. It is crazy. So am I, for I paid $13.00 for it;” while of Portraits and Prayers she notes, “All quite hideous. Perhaps it is fiction. Posterity can decide. I know what I think it is.” Yet Lillian also recognizes the ephemeral nature of many literary judgments, as she states in her entry for Ernest Hemingway’s A Farewell to Arms: “But 10 years ago, and think of the change in taste, which allows ‘A Farewell to Arms’ to not only be published but praised! A Revolution in taste in the last decade. What will the next one bring?”

Along with these literary assessments of various novels in her collection, Lillian includes this interesting publication history of Alice Tisdale Hobart’s Pidgin Cargo, which was later released as River Supreme. “Published in First Printing July, 1929, it had a small sale. Then ‘Oil for the Lamps of China’ was published in 1933, with large sales, and the publishers re-issued ‘Pidgin Cargo’ as ‘River Supreme’ in 1934. The same book with a new title, and the prestige of a best-seller before it, and the book was a great success, a best-seller. A fine book, handicapped by a stupid title; with a good title it came into its own.”

Two additional notes in this volume provide insight into Lillian’s personality. The first is a remark in her entry for Oliver La Farge’s Laughing Boy, in which she comments on the page that has been cut from the collecting journal: “See this removed page? The result of discussing politics and trying to write.” This entry was probably made some time during the 1940s, when Lillian would have been about 80—yet she’s still so interested in political issues that it distracts her from her records. The second comment, which accompanies They Stooped to Folly, by Ellen Glasgow, reveals again how much Lillian enjoyed reading and sharing her love of books with others—even to the detriment of her collection. She writes, “I loaned my copy to so many friends while at Gloucester, that I cannot call it mint now.”