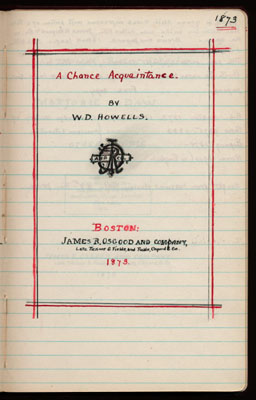 A comment in this volume of the collecting journals reveals Lillian’s awareness of the development of American literary history. In her entry for William Dean Howells’s A Chance Acquaintance, Lillian marks the shift from the Romance to realism with the following observation: “I have finished entering Hawthorne, and now I begin to enter William Dean Howells. It is interesting to begin and follow a new author through his career.” Hawthorne is one of the major figures of American Romanticism, while Howell’s writing is central to realism; thus this transformation of genre was well underway by the time of Howells’s 1873 A Chance Acquaintance. Just a few pages before this quote Lillian had recorded Hawthorne’s posthumously published Septimius Felton, followed soon after by her notes on Howells’s first novel, Their Wedding Journey, and A Chance Acquaintance.

Lillian’s entry for Bret Harte’s Gabriel Conroy demonstrates her excitement over and investment in the details of collecting. She records this story: “And then in July, 1944, Mr. Troxell of Yale Library told me of a difference in “Gabriel” and did not tell the difference. I went at once to the N.Y. Library to Drakes, and soon saw the copyright was the storm center. Mine was much smaller. The copyright of the N.Y.P. much larger. Mr. Drake had 3 copies, all 3 large.” After noting several specific differences, Lillian continues her hunt. “I wrote to the Huntington Library. Theirs in large type. Mr. Troxell pointed it out to Jacob Blauck who was studying Bret Harte in the Yale Library, and Mr. Troxell writes ‘yours is right.’ Mr. Drake immensely interested, and I thrilled. […] I now await developments. I have all letters from Hunley and Yale carefully kept.” Such conversations show not only her interest in collecting, but also the respect given her by librarians and other collectors.

As in several of the other volumes, information about the 1940s, in which Lillian is working, creeps into the entries. In entries for several of Bret Harte’s books she writes of the 1944 heat wave oppressing New York City. In her notes on Thankful Blossom she states, “This bought and catalogued, Aug. 1, 1944. A day of terrific heat, following a July that broke all heat records. In my Library to-night the mercury must be 100 at 10 P.M.” A few pages later, above The Twins of Table Mountain, she writes, “A Red hot night, Aug. 1, ’44. I catalogue to forget the heat.”