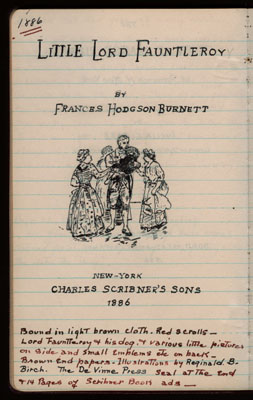 Like Volume VI, Volume IX opens with a quote from Carl van Doren’s Cambridge History of American Literature, of which Lillian writes, “All the novels mentioned by Mr van Doren are in my collections. He was a wonderful guide.” The passage she quotes discusses “three of the five major American novelists, Mark Twain, [William Dean] Howells, [and] Henry James,” as well as other popular writers of the 1880s, such as Judge Albion Winegar Tourgee, Edward Bellamy, Helen Hunt Jackson, Henry Adams, and John Hay.

In her entry for Henry James’s Portrait of a Lady, one of his most respected novels, Lillian includes this remark, “Of the brothers William and Henry James it was said that William wrote philosophy as if it were a novel and Henry wrote novels as if they were philosophy.” While such notes show that she clearly enjoyed entering novels into her records, there were also times when she tired of the painstaking work of creating the collecting journals. In Aubert Dubayet she writes, “Gracious I am tired making that Osgood and Company monogram! This one certainly grew to be a large one. I am listening to the opera of Lakmé on the Radio. Lily Pons is singing, and I thinking of the great voices I have heard in this role. Melba stands above the rest.” This leads to one of her fullest reflections on the nature of the collecting journals: “Back to my catalogue, which is meant to be a guide to identify the books described; but naturally size of type, monograms, are not accurate. If there is a difference that is important to be noted, I will call attention to it.”

One final story in this volume reveals the pleasure that Lillian received from tracing the provenance of her novels. She tells the following story of S. Weir Mitchell’s Hephzibah Guinness: “This is to show a surprise in Book-collecting. I bought the above book from Maxwell Hunley in 1944, June. Howell’s presented it to Mrs Wilmot Johnson. This I saw when I went to catalogue it. Mrs Wilmot Johnson I knew well. She was a most intimate friend of my Mother-in-law, Mrs William Sinclair. She and Mrs Johnson, not Marylanders, came to Catonsville, MD, loved it, bought a place, lived and died there 20 years ago. It bears the Book-plate of F.W. Skiff of Portland, Oregon. I know his books and Mr. Henley, bought it from him. So my  ‘Hephzibah’ traveled from Catonsville, MD, to Portland, Oregon, to Beverly Hills, California, then to me in New York, and I lived every summer, until married, at my Father’s home in Catonsville. It made the circle. I knew it was a ‘Presentation Copy,’ but imagine my surprise when I saw it was to an old friend of my girlhood.”