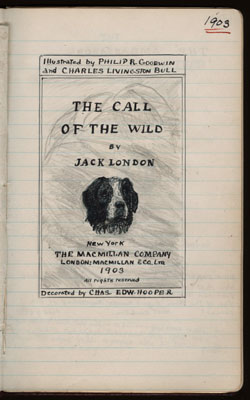 In Volume XII Lillian brings up several issues that she discusses in earlier volumes, such as deciding what counts as a best seller and how to weigh popularity and literary merit. For example, in her entry on Henry James’s The Sacred Fount, she writes, “James never a ‘best-seller,’ but he certainly wrote books of beauty and distinction.” She comes to an opposite conclusion about Amelia E. Barr, noting in her entry for The House on Cherry Street, “This will be the last of Amelia Barr’s novels I will include. Three is enough. She may have no literary merit, but she had a large following, though no novel attained the popularity of ‘The Bow of Orange Ribbon.’”

Once again Lillian’s enthusiasm for creating the collecting journals is tempered by her tiredness. In the early 1940s Lillian would have been nearing eighty, and in her entry for In Ole Virginia, by Thomas Nelson Page, she writes, “Life is too short and I am too old to finish [the illustration for this cover page].”

Despite her tiredness, she still included many amusing remarks in her entries, such as this one regarding her two copies of Upton Sinclair’s The Jungle: “Now which is first? Both published February 1906. So I include both imprints. Facing Each other in my catalogue, they can fight it out together.”

While this collecting journal contains fewer stories than some of the others, it does have many beautiful illustrations that Lillian copied in. Among these are Jack London’s bookplate and the cover pages for London’s Call of the Wild, Ernest Thompson Seton’s Monarch, the Big Bear of Tallac, James Cabell Branch’s Gallantry, Ellen Glasgow’s The Ancient Law, Booth Tarkington’s Beasley’s Christmas Party, and George W. Cable’s ‘Posson Jone’ and Père Raphaël.