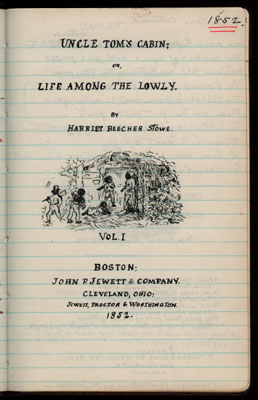 Volume VI opens with the quote from Carl Van Doren’s 1926 The American Novel that discusses the divide between the popular antebellum writers and canonical authors such as Hawthorne. This quote also appears in the second Volume II of Lillian’s collection, which confirms that volume’s status as a leftover from an earlier set of collecting journals. In the passage, Van Doren relates how sentimental novels ruled the antebellum literary scene. This passage begins, “But Hawthorne, and Cooke, and Winthrop were not the characteristic novelists on the Eve of the Civil War. It was the domestic sentimentalists who held the field. A brief decade endowed the nation with its most tender, most tearful classics.” Today, critics see these novels as important not only for the different literary aesthetics that they present, but also for the facets of nineteenth century life that they reveal.

Some important novels appear in this volume of the collecting journals, including Herman Melville’s Moby-Dick, Susan Warner’s Wide Wide World, and Harriet Beecher Stowe’s Uncle Tom’s Cabin. In recording various novels, Lillian writes both of questions of bestselling fiction and of memories attached to her books. In her entry on Moby-Dick, Lillian notes the changing opinions regarding the novel’s literary merit: “A Book, not at first popular, but now recognized and had joined The American Classics. […] Now like “The Scarlet Letter,” “Uncle Tom’s Cabin,” it is expensive, but not rare. The demand is greater than the supply. The price for a fine copy is often $1,000—mine cost $197.00 and is selling for 3 times that price, or from 5 to $600 in America. I was lucky, but waited until 1939 before buying.” Opinion has gone the other direction on William Gilmore Simms’s Southward Ho!, of which Lillian recalls the following tale. “I was lunching with Edith Wetmore, the day I bought this book. At the table she said, ‘You keep smiling, what pleases you?’ ‘I have just bought a fine copy of one of Wm. Gilmore Simms books.’ ‘Well what of it? Who is your Mr Simms?’ Not one at the table had ever heard of him. Such is fame, and as I said, ‘my collection is for such as you.’”

Lillian, well aware of the literary merit of the books she collects, also reacts to them as a reader. For instance, of Maria Cummins’s The Lamplighter, she writes, “‘The Lamplighter’ is perhaps of the sentimental novels, the best.” And recalls, “It was given to me to read when I was young, and I have never forgotten the wicked drowning of Gerty’s kitten.” On the final page of the journal she also records a story about obtaining her copy of Uncle Tom’s Cabin, to which she referred earlier as, “this un-paralleled book.” “Mr Duncan came to see me bringing his Father’s copy of “Uncle Tom.” We had a long talk in the Library. It was St. Valentine’s Day, and Bob gave me the book for a Valentine. A fine Valentine. This copy was never offered in a shop. Mr Duncan heard I wished one, through a mutual friend. […] Bought in 1931.”