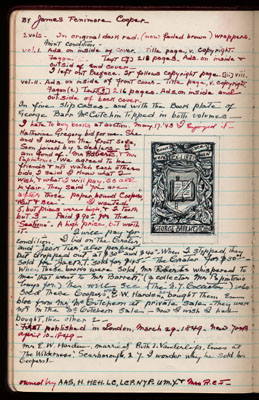 This volume offers insights into both Lillian’s role as a collector and her investment in details of the text. In her entry for James Fenimore Cooper’s The Sea Lions, she tells this story of attending an auction: “I hate to buy books at auction. May 17. ’43. I enjoyed it. Katherine Gregory bid for me. She and I were on the front sofa, soon joined by 2 dealers—I am fond of Mr Roberts and Mr Papintonio. We agreed to be friends and not watch each others bids. I said I know what I wish, and what I will pay, so all is fair. They said ‘You are after those paper bound Coopers,’ ‘Wait and see.’ I wanted 5, but prices were high, and I took but 3. […] When these books were sold, Mr Roberts whispered to me ‘That went to Mr Barrett,’ (a collector Mr Papintonio buys for.)” This Mr. Barrett is likely Clifton Waller Barrett, whose collection is now also housed in the Small Special Collections Library at the University of Virginia. So while several collectors once split these various volumes of Cooper’s, they have come together again here. Lillian’s knowledge of other collectors and her enjoyment of their company show her dedication to American fiction.

The entries in this volume reaffirm Lillian’s love of textual criticism as she explores the differences that appear in different editions. She confirms that her volumes match the noted errata for other first editions, and at times records these errata in her entries. For instance, she copies a table from Richard Curle’s Collecting American First Editions that shows the alterations from the first to second edition of Nathaniel Hawthorne’s The Scarlet Letter. Lillian also takes pleasure in the marginalia added by readers; such marginalia have become central to critics exploring how early American readers interacted with the novels they read. In her entry for Sylvester Judd’s Margaret she states, “Page 431 is marked by a pencil, so is page 432. The marks in a book always interest me; and I most certainly leave them.”

While she occasionally comments on the poor quality, ugliness, or critical merit of certain volumes, Lillian again demonstrates her dedication to creating a comprehensive collection of first editions of bestselling American fiction in this collecting journal. A few amusing examples of this include her notes on William Gilmore Simms’s Beauchampe; Joseph C. Neal’s Peter Ploddy; and Herman Melville’s Mardi. Of Beauchampe she writes, “[It] is a very difficult book to find. Perhaps it was read to death. Anyway it has eluded me, and I welcome this copy in lieu of a better one.” She despairs that Peter Ploddy is “an ugley [sic] paper bound book of the period. This copy is whole, but not fresh, and I dislike to put these books in my collection.” Yet she does so because “It is rare.” And while she writes that “Critics pronounce [The Scarlet Letter] the ranking American Novel,” she also records the Cambridge History of American Literature’s assessment that Mardi is “one of the strangest, maddest books every composed by an American.”