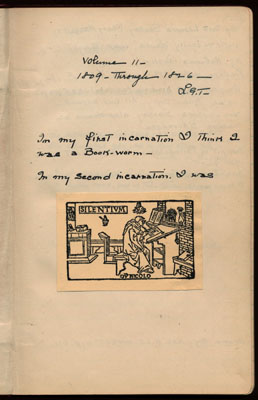 Lillian’s second collecting volume continues to ask questions central to the first volume, such as what qualifies as fiction or who is an American author. It also includes many amusing comments and informative notes for particular books in the collection. For instance, for James Fenimore Cooper’s The Pioneers she tracks a controversy over the printing of the first edition, while of The Life and Adventures of Obadiah Benjamin Franklin Bloomfield, M.D., she writes, “Might be called A Rake’s Progress. Pretty coarse—Hope to learn the author’s name.” She again raises the question of what qualifies as fiction, including both Lydia Howard Sigourney’s Sketch of Connecticut and Hints to My Countrymen despite questions about their genre. Of Sketch of Connecticut, she writes, “Not in Wright[’s bibliography]. Perhaps he did not think this is fiction. It is a narrow line, but it reads like fiction, so in it goes.”

Her knowledge and determination in collecting are reflected in her story of finding John Neal’s Seventy-Six: “For years I have sought it, and saw the first copy today, Jan. 13, 1941. Hurrah for the 13th. Not a fine copy, but a welcome one. […] Bought from the Collector’s Book Shop. They bought it from Morrill’s Catalogue. I telephoned to Boston for it. They said, “Sold.” I guessed who had bought it at once. Telephoned, and Mr. Kohn said, “Yes.” They paid 15.00; I $25.00.”

As much as she enjoyed gathering her collection, she also generously donated duplicate volumes to various libraries (and later, her entire collection to the University of Virginia Library). She tells this story of donating a copy of Rebecca Rush’s Kelroy to Yale: “Bought a copy years ago, in 1937, bought a better one. Paid $8 for the better copy, and $40 for the one I first bought, and which in 1939 in Oct. (I think) I gave to Yale. We motored  up, Bob and I, had a fine day. Called, and had tea with Mr. And Mrs. Gilbert Troxell. Yale delighted to have ‘Kelroy.’” Lillian loved to spend time discussing collecting with other book lovers.