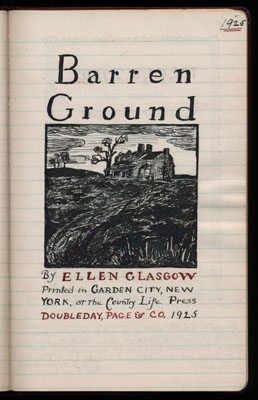 Like the other volumes, XIV is filled with stories and reflections on American culture. The highlight of is certainly Lillian’s long anecdote about purchasing her first edition of Anne Douglas Sedgwick’s Adrienne Toner, which illustrates her pleasure in searching for first editions. “A fine copy for which I paid 10 cents. Buying it in Mr Jewett’s book-shop-in-a-barn. […] How well I remember that day in Mr Jewett’s Barn! Both Bob and I enjoyed stopping the car outside the gate, walking down the stony road to the barn, I poked about for books. Mr Jewett and Bob talked. This particular day, Bob as seated on the only chair, Mr Jewett on the mowing machine, going over the ‘War between the states’ hot and heavy—I came out with my book—‘How much is Adrienne Toner?’—‘Ten cents.’ ‘No, how much is it?’ Ten cents, now Mr Taylor if so and so had brought his troops in’—and so it went. A warm afternoon, and a warm discussion. When it was over, Mr J. refused to take the 10 cents. A distinguished and fine looking man. Coatless, collarless, but his white shirt spotless. A cousin of Sarah Orne Jewett. While stopping at Gloucester, we often drove down to Mr. Jewett’s book-shop in a barn.”

Lillian adds interesting reflections on society’s temperament during the time this collecting journal covers, following the end of World War I. Although similar comments appear in several entries, the most complete is the one she writes for her entry for Ben Hecht’s Erik Dorn: “This was the decade after the war when it was the thing to be disillusioned, cynical, critical, to be-little the fine, to rebel against standards. One could be reckless, but never dull. The books reflect it.”