Following the example of their patriarch, who served as a justice of the peace, militia officer, coroner, and vestryman, the descendants of William Cabell established an outstanding tradition of public service. Law and custom proscribed the political involvement of women, but the Cabell men served at all levels of Virginia government–as local officials, Burgesses, Delegates and Senators to the General Assembly, as Governor, and as Representatives and Senators to the United States Congress. As the Cabells spread out across the new nation, members of the family took an active role in the leadership of other states as well. 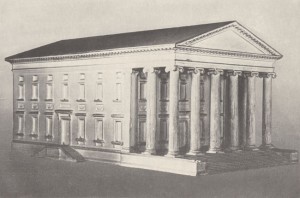 A model of the Virginia State Capitol, as conceived by Thomas Jefferson in 1785. Dozens of Cabells served the Commonwealth in the completed structure.

The links below are designed to give some indication of the Cabell family’s impressive political record. While the data may not be exhaustive, it is at least evocative of the high value that men of the family have placed on participation in government at all levels. Included elsewhere are records of the Cabell family’s military service.