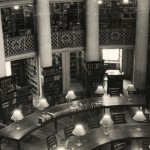 Joseph Carrington Cabell‘s contributions to education in the Old Dominion are well known–his sponsorship of the University of Virginia in the General Assembly and his tireless labors alongside Thomas Jefferson on behalf of that institution. This co-founder of the university in Charlottesville was acting in a well established family tradition of support for higher education. The family’s American founder, William Cabell, himself displayed a commitment to education, as demonstrated by his wide and varied library. Nathaniel Francis Cabell has speculated that all four of his male sons attended the College of William and Mary, though records survive only for Nicholas Cabell‘s matriculation. A remarkable proportion of the Cabell men received training at a college or university, and many of them–notably Joseph C. Cabell, William D. Cabell, and Philip Barraud Cabell–devoted their lives to bringing others the same type of educational opportunity.

When William H. Cabell was Governor of Virginia, between 1805 and 1808, he several times exhorted the General Assembly to support more vigorously higher education. The statesman had attended both Hampden-Sydney and the College of William and Mary and was convinced that education was important for all white Virginian men. On December 5, 1808 he explained to his colleagues, “It could not be expected in any country, that every man should be a philosopher; but the elements of learning should be brought within the reach of every; even the poorest, citizen; and in this case only be accomplished by the aid of government. The influence of education on the happiness of individuals, and on the manners, peace and good order of society, is obvious to the most superficial observation. But its influence in another point of view is equally, if not still more commanding and interesting. It constitutes one of the great pillars on which the civil liberties of a nation depend.” Members of William H. Cabell’s own family had already been active in promoting such learning; uncle Col. William Cabell and great-uncle Paul Carrington had served as original trustees of the  College of Hampden-Sydney. Sadly, as with Joseph Carrington Cabell‘s foundational work for the University of Virginia, higher education was also expected to help defend a way of life based heavily on the labor of enslaved African Americans. 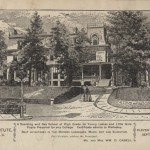 William D. Cabell (1834-1904) also earned renown among his kinsmen as an educator. Following the Civil War, he transformed his plantation, Norwood, from a site of agriculture to a site of intellectual production, preparing former Confederate veterans for college or university at the Norwood School. Following the Norwood School’s closure in 1879, William and his second wife, Mary Virginia Ellet Cabell, moved to Washington, D.C. and established the Norwood Institute for Girls and Young Ladies (at right) in 1881. The school ran for sixteen years.

Several Cabells also served on the faculty of various institutions of higher education, public and private. James L. Cabell was Professor of Anatomy, Physiology, and Surgery at the University of Virginia, Philip Barraud Cabell a professor at Urbana University and onetime principal of the Female College in Greensboro, Alabama.