Several prominent members or near relatives of the Cabell family attempted to improve their living situation (and that of those around them) by sponsoring or helping to sponsor public works. Long before Henry Clay and the Whigs made such “internal improvements” a political issue, a few Cabells believed that good civil governors should help foot the bill for projects such as the construction of roads, canals, and public buildings. Such civic-mindedness began with the founder, William Cabell, who showed his support for a variety of public projects. In 1763, for example, he contracted to build the Albemarle County Courthouse, the cornerstone of local government in the eighteenth century. Furthermore, one of the founder’s descendants, Nathaniel Francis Cabell, found among his ancestor’s papers a pamphlet entitled “A View of the Advantages of Internal Navigations.” Cabells’ interlineations in this volume demonstrate his enthusiastic support of canals and other public works. In 1774, Cabell’s sons, William and Joseph, became trustees of an attempt to bring canals to Virginia by improving Richmond’s access to the Chesapeake Bay. When they had finally raised enough money to begin work, in 1785, they did so under the auspices of the James River Company. 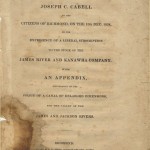 But it was one of Cabell’s later descendants, Joseph Carrington Cabell, who made navigation of the James a reality in central Virginia. In 1835, the state breathed fresh breath into the project begun in 1774 by incorporating the James River & Kanawha Company and and pledging state funds for its maintenance. Shareholders of the new company credited Joseph C. Cabell for his role in raising funds for the renewed effort by electing him their first president, a position he held until 1846. Though cost overruns, the furies of Mother Nature, and the emergence of the railroad prevented Cabell or his corporation from reaching the Kanawha, the Company had completed 147 miles of canal by 1840, stretching up the James River all the way to Lynchburg. A combination of slack water navigation and canal works facilitated navigation on the river all the way to Buchanan, Virginia by 1851. 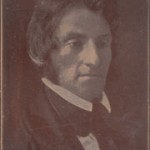 The James River and Kanawha Company hired a future Cabell in-law to oversee the construction of the many locks that would made up the canal. In 1837, at the age of 27, Charles Ellet, Jr. (at right), became the chief engineer. Less than two years after accepting the job, Ellet’s wife gave birth to a daughter, Mary Virginia Ellet. Mary Virginia would marry William Daniel Cabell, binding the two families together. At roughly the same time that Mary was born, however, Charles Ellet clashed with Judge Wright, an older engineer and lost his job in 1839. The company’s decision to release Ellet was perhaps a short-sighted one; the brilliant engineer went on to accomplish a number of stunning feats, including the design of the first suspension bridge over Niagara Falls in 1848.