Cabells and the Westward Movement

“Of the family as a whole it may be said, that they cleared the forest & tamed the wilderness around them; improved & added to their inheritance, while they maintained a liberal hospitality in proportion to their means.”

When William Cabell arrived in Virginia c. 1726, he found that much of the tidewater area had been settled, however lightly, but that vast realms of territory awaited enterprising men in the Commonwealth’s interior. By the original charter, Virginia’s territory extended to the Pacific Ocean, and European settlers regarded the presence of Native Americans as only a minor obstacle to possession of this land. Many thousands of Europeans, and the men and women of African descent whom they enslaved and exploited as laborers, moved inland, but what set the Cabells apart was their success in controlling, as well as participating in, this movement. Using their expertise, particularly in surveying, the founder and his sons were able to amass a substantial Cabell homeland, centered around what would in 1808 become Nelson County, and then maintain their estates through the exploitation of the many enslaved persons they acquired. 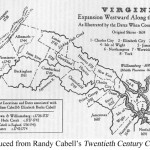 County development could barely keep pace with settlement. Randy Cabell developed the map above, which identifies both the date of new county formation and locates several of the key Cabell properties.

William Cabell’s cousin and fellow emigre, William Mayo, acted as a surveyor in the West Indies and was quick to apply his skills and turn them to his advantage in America. When the Burgesses created Goochland County in 1728 as the Commonwealth’s westernmost territory, Mayo scored an appointment as the new surveyor and laid out plans for the city of Richmond, among other settlements. William Cabell assisted him in this process and learned some skills as a surveyor.

William Cabell and wife Elizabeth Burks Cabell had moved into Goochland before Cabell left for several years in England, in 1735. Upon Cabell’s return in 1741, he began to utilize his skills as surveyor and to accumulate vast tracts of piedmont real estate, most of it along the James River. In his capacity as assistant surveyor of Albemarle County from 1746-1754, Cabell entered 1209 separate surveys; he knew the territory well and could therefore choose his own lots with discretion. Col. William Cabell, Sr. followed his father into the surveying profession. He succeeded his father as assistant surveyor of Albemarle from 1753-1761 and then became chief surveyor of Amherst from 1761-1777. In all, as Dr. Thomas Bannister has shown, William Cabell and his four sons brought 58,000 acres into the family, much of which was surveyed by a Cabell! 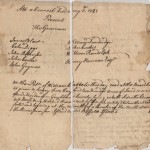 The Cabells acquired land as settlers, not as speculators, and swiftly took possession of many thousand acres, some of which remain in the family today. They embellished them with elite homes and improved them, in large part through the cumulative labors of thousands of enslaved persons. After the exertions of the initial generation, most Cabells remained in central Virginia. A few, however, struck out further west. One of Cabell’s grandchildren, Mary Hopkins Cabell, married John Breckinridge in 1785 and moved with him to Kentucky in 1793. They were among the first colonists to arrive near the capital of Lexington and received a grant of 30,000 acres on which to plant the Cabell family in a new territory.