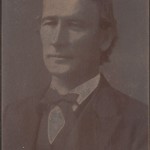 William D. Cabell was born to Mayo and Mary Daniel Cabell at the family throne of “Union Hill” in 1834. Cabell completed either two or three years at the University of Virginia (official records indicate his presence in 1852-53, but his personal notes indicate that he also attended the 1851-52 and possibly the 1853-54 sessions). After his departure from the University, Cabell received from his father the family estate “Norwood.” He settled onto the plantation with his distant cousin and bride, Elizabeth Nicholas Cabell, whom he married on 27 September 1855. William was the executor for the troubled estate of Joseph C. Cabell, who died in 1856, and manager of his younger siblings’ inheritance of land, possessions, and many enslaved persons. The Civil War brought freedom to the Cabell family’s enslaved persons, but to the family it brought economic devastation as the long-standing system of white domination of African Americans was upended. Mary Daniel did not survive the war, dying on 5 April 1863.

During the war, Cabell served the Confederacy as a commissary for the Confederacy. He organized a home guard for Nelson County and furnished both soldiers and their families with supplies. Often, he provided these supplies at his own expense, for which he was never reimbursed. As soon as the Confederacy folded, Cabell–like his hero, Robert E. Lee–devoted his energy to serving the reunited nation with every ounce of his energy. As did his father, he pledged his loyalty to the United States government and opened a school on his plantation, appropriately called the Norwood School, in order to prepare Virginians, particularly Confederate veterans, for higher education and subsequent civilian responsibilities. 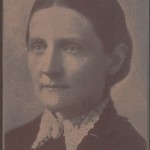 Also following Appomattox, William fell in love with a second distant cousin, Mary Virginia Ellet (at right). The two met in 1865 when William took a wounded kinsman of his, John W. Daniel, to Philadelphia for an amputation. After a brief space, they married on 9 July 1867. Though the Virginia Cabells initially “looked askance” at the Northern interloper who dared accompany William back to Norwood, which had sustained damage at the hands of federal troops, Mrs. Cabell soon won them over. When the Norwood School floundered financially in 1879, she used her own family money to purchase the property and moved with William to Washington, D.C.

While in Washington, D.C., the couple ran another worthy but ill-fated academy, the Norwood Institute for Girls and Young Ladies. While struggling professionally, however, the two flourished socially. Mrs. Cabell became the animating spirit of the Society of the Daughters of the American Revolution, attending the organizing meeting on 11 October 1890 and serving as its first Vice President. After the death of First Lady Caroline Lavinia Scott Harrison, who had been the first President of the DAR, in October of 1892, Mrs. Cabell served until death as active or honorary presiding president. Meanwhile, her husband helped to organize and became the first president of the University of Virginia’s national Alumni Association. These and other social commitments compensated somewhat for the Norwood Institute’s forced closure in 1897.

After the closure of Norwood Institute, the family’s older children scattered, and husband, wife, and youngest daughter Margaret Cabell moved back to Virginia. They scratched out an existence at Norwood for several years, before William’s death in 1904. In 1908, no longer able to make a home in Virginia, mother and daughter moved to Chicago. There Mrs. Cabell died on 4 July 1930.