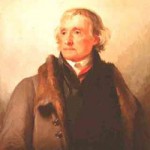 The “Sage of Monticello” left such an extraordinary mark on the state and nation that no biographical sketch, however lengthy, could catalog his myriad contributions or unravel his bewildering internal contradictions. This page, then, touches only on the many points of connection between Jefferson and the Cabells. The Jefferson and Cabell families were among the first in central Virginia, and they worked together on numerous enterprises throughout the decades, from surveying the first parish boundaries to founding the University of Virginia.

Thomas Jefferson’s father, Peter Jefferson (1708-1757), knew and worked with William Cabell. The two men were each trained as surveyors and each took advantage of that training to mark out for themselves large tracts along the James River. William Cabell was a Justice of the Peace in Goochland County from 1728, and Peter Jefferson joined him in that role in 1735. When the first session of the Albemarle County Court met in 1744, Cabell and Jefferson were again colleagues on the County Court. During the French and Indian War, the elder Jefferson became better acquainted with at least one second-generation Cabell, Col. William; each commanded Albemarle County troops during the conflict. Even more tightly bound to the Cabell family by ties of public service, Thomas Jefferson worked with men in four generations of Cabells! 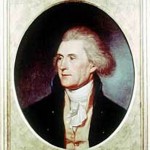 Jefferson allied with the Cabell patriarch in at least one business venture and labored with his four sons in the patriot cause. At some time before 1771, Jefferson and “Dr. William Cabell, Col. William Cabell, Col. Joseph Cabell,” and seven others organized the “Albemarle Furnace Company” to extract iron from mines near the Hardware River. Jefferson then worked with Cols. William and Joseph Cabell during his 1769-1776 service in the House of Burgesses. When the General Assembly replaced the House of Burgesses in 1776, Cols. John Cabell and Nicholas Cabell, in addition to Cabell kinsman John Breckinridge, joined Jefferson in that body. All four siblings contributed to the Revolution, and Jefferson followed their careers as wartime Governor (1779-1782). In 1780, the Amherst County Court recommended Nicholas Cabell to Jefferson for a promotion.

Following the Revolution, Jefferson’s political career soared even higher, and he became an important source of patronage for the political careers of several Cabell descendants. William H. Cabell, who had identified with the Jeffersonian Republicans upon his first election to the General Assembly in 1796, worked hand-in-hand with the Jefferson administration during his term as governor (1805-1808) in his handling of the Chesapeake-Leopard affair and the trial of Aaron Burr, held in Richmond. Jefferson had a more direct hand in the launching of the outstanding career of William Cabell Rives, whom he tutored at his home in Monticello from 1809-1811. Jefferson took an equal interest in the political career of his eventual partner in the founding of the University of Virginia, Joseph C. Cabell. Through his secretary, Isaac Coles, he offered a young but well-traveled and even-better connected Cabell three federal offices, viz. Upper Clerk in the Dept. of State, Secretary of Orleans Territory, and Consul at Tunis. Many other Cabells, almost uniformly Jeffersonian Republicans, knew the third President both politically and socially. Jefferson called John Breckinridge, for example, out of the United States Senate to serve as his Attorney General in 1805.

Though Jefferson thus worked with literally dozens of Cabells, his friendship with Joseph C. Cabell proved the most enduring. Jefferson worked intimately with him to build the University of Virginia, the last great project of his life.

Jefferson Papers at the University of Virginia: Online Guide.