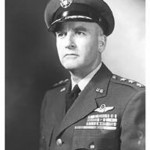 Charles Pearre Cabell led the most successful military career of any of his kinsmen. He graduated from West Point in 1925 and served initially with the 12th Field Artillery. He reoriented his career from the land to the air in 1931, however, when he completed Advanced Flying School in 1931 at Kelly Field, Texas. He took advantage of every opportunity for additional training, including a trip to the Command and General Staff School on the eve of World War II. He traveled to the United Kingdom and observed the Royal Air Force in 1940 as they engaged Hitler’s Luftwaffe.

When the Japanese bombed Pearl Harbor, then, Major Cabell was in excellent position to help coordinate America’s aerial response. This he did, first as chief of the advisory council for the commanding general of the Army Air Forces. In late 1943, Cabell traveled closer to the scene of the action and commanded the 45th Combat Bombardment Wing in Europe. Brigadier General by April 1944, he was soon coordinating all US air operations and intelligence in Europe.

Cabell’s star continued to rise following the war, and he was made major general in 1947. He served as director of the joint staff in the Office of the Joint Chiefs of Staff from November 1, 1951 through April 23, 1953. On that date, Lieutenant General Cabell was sworn in as deputy director of the Central Intelligence Agency, a position which he held through the worst of the Cold War and until his retirement in January 1962.

General Cabell’s son followed him into the Air Force and also earned distinction as a general officer. Charles Pearre Cabell, Jr. was promoted to brigadier general on August 1, 1983.