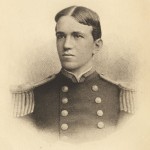 Though his father, Joseph C. Breckinridge, was a decorated general in the United States Army, Joseph C. Breckinridge, Jr. decided at a young age to pursue a career in the Navy instead. He enrolled at Naval Academy in Annapolis in 1888, at the age of sixteen. Classmates at the Naval Academy remembered Breckinridge as a prankster. Strong-willed and brave, Breckinridge enjoyed hazing the younger cadets, got into numerous scrapes, and managed to enjoy himself despite the rigorous routine. The stern disciplinarians of the Academy did not enjoy such good-natured pranks, however, and they dismissed him from the school frequently enough to delay his completion of course work until 1895. 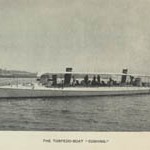 For the requisite two years following course work, Breckinridge received hands-on training as a cadet aboard several ships, including the infamous USS Maine. By all accounts, the experience of active duty left him a changed man, and Breckinridge performed admirably on the Academy’s final examinations in 1897. He won a commission on the USS Cushing, a torpedo boat (shown at right) commanded by his friend, Lt. Albert Gleaves. It was on the Cushing, as the ship steamed towards Havana to rendez-vous with the ill-fated Maine that Breckinridge lost his life, on February 11, 1898.

The elements and fatigue took Breckinridge’s life, rather than enemy fire. But it was the threat of imminent war with Spain that sped the Cushing from Key West and into a storm early on the 11th. Waves regularly washed over the low-slung torpedo boat, and high seas made life on deck extraordinarily hazardous. Exhausted by working longer hours than required and declining to take advantage of his leave, Breckinridge, who by this time had won the universal acclaim of his peers, was in no condition to battle such fierce elements. But the thick of the storm found him conversing with the Commander above deck. In a lull in the conversation, the Commander watched helplessly as a strong wave hurled Breckinridge against the lifelines. One of the strong bronze cords snapped, and Breckinridge slipped into the sea. The crew gallantly rescued his body, but efforts to resuscitate him failed. Several sad hours later, the Cushing joined the Maine in Havana.

Four days later, the Maine went down in a flaming nightmare, with scores of American casualties. By April, the United States had officially declared war on Spain. Inaugurating hostilities were the private tragedy of one Ensign and the pubic horror of the Maine.