At every stage of his life, Duke joined social, honorary, and philanthropic societies. While at the University, he discovered in the Washington Literary Society and the Zeta Psi fraternity both meaningful friendships and opportunities to exercise his gifts in leadership and oratory. After graduation, he served on multiple corporate boards–including that of the Bank of Albemarle, the Washington Railway and Electric Company, the Kentucky Coal Company, and the Charlottesville Ice Company–but could not slake in the business world his thirst for the good-humored exchange of ideas and the company of like-minded men. Politics went far to fill this void, and Duke stumped the state tirelessly on behalf of Democratic candidates. As he had while a student, however, he found in his adulthood the most meaningful camaraderie in voluntary societies. 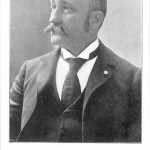 It is impossible to catalog Duke’s extensive involvement in literally scores of honorary societies. His membership in the Masons is best known, for he served as Grand Master of the Virginia branch of that organization from 1897-1899. It fell to him during his term as Grand Master to host the Masons’ centennial celebration of George Washington’s death at Mount Vernon. Duke appears at right as Grand Master.

In addition to maintaining lifelong ties with Zeta Psi and the Masons, Duke also patronized smaller societies. For example, he was inducted into the Odd Fellows, signed up for the local YMCA, and served as Virginia’s representative to the Veterans of Colonial Wars. This, of course, in addition to his active support of the local chapter of the Sons of Confederate Veterans. He gave his time and treasure to more otherworldly pursuits as well, and was a key contributor to St. Paul’s Episcopal Church for many years.