In nineteenth-century Virginia, as elsewhere, politicians did much of their most important work informally. In the Virginia context, “Barbecues” were especially important occasions for the state’s elite to build connections among one another. From the beginning of the Civil War until after the end of Reconstruction (1870 for Virginia), Albemarle County’s landholders seldom convened for such lighthearted events. In 1873 or 1874, however, Col. R. T. W. Duke, Sr. became the founder and first president of the “Cool Spring Barbecue Club,” and restarted barbecues on the land adjoining his home at Sunnyside. Dignitaries from as far as Richmond came to enjoy the squirrel stew, whiskey, apple brandy, and–of course–pork barbecue. Congressmen, mayors, doctors, judges, and merchants found that the good food, drink, and music facilitated the most memorable conversations… 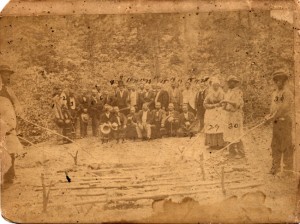 Three Dukes are visible in this photograph, taken between 1873 and 1898. This is one of at least two group portraits taken of this particular session of the “Cool Spring Barbeque Club,” which R.T.W. Duke, Jr. described in detail in his Recollections. R.T.W. Duke, Sr.is # 15, Jr. # 7, and William R. Duke # 5.

The combination of drink and accomplished men created memories which bonded those present. Acknowledging how freely the alcohol flowed, Duke confessed that “some of us did drink more than we ought to have done; some alas! retired to the kindly shade of the oaks and pines & dreamed away the afternoon. What of it? ‘Shall there be no cakes and ale’ because a few poor fellows had imbibed too freely?” When liquor mixed with “the splendid men who constituted the old Cold Spring Barbecue Club,” the results were often hilarious. In their inaugural meeting, for example, Virginia’s finest attempted to send an inebriated German interloper home astride a cow!

Duke acknowledged that the success of such events depended heavily upon the labor of descendants of Albemarle County slaves. The gentleman to the right was one of several men who did the difficult work of actually preparing the food. Because he was still bound up in antebellum folkways, it seemed natural to Duke that black men and women would serve the region’s white political and social leaders in this capacity. He praised the former slaves, like Caesar Young and Mandy and Juba [Garth], who consented to help put on his parties. Of the whites who enjoyed the fruits of the blacks’ labor, Duke reminisced that “slavery helped to produce a type of the noblest bravest, high minded, chivalrous gentlemen.” 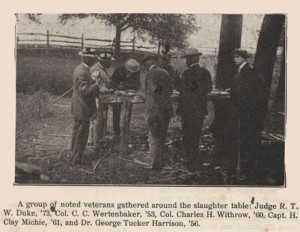 The above photograph dates from c. 1913.