“He did not aspire to go down to posterity as either a prose-writer or a poet. But he possessed those deep feelings and vivid emotions and imaginative ideas which many who have them delight to express in writing or music or art, according as they may be endowed with these gifts of expression. Thus he came to write poetry with the enjoyment that he had in sometimes expressing himself in music, and with little purpose of publication. It was ‘to let himself out,’ that he wrote verse.”

– Armistead C. Gordon, from the introduction to In My Library and Other Poems, pp. iv-v. 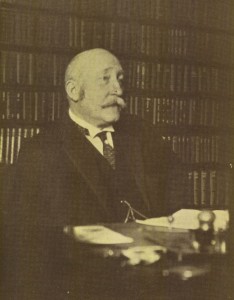 Duke started writing poetry early and began to share his work with others by the time he arrived at the University of Virginia. His publications–in magazines such as Century, Lippincott’s, and Illustrated American and in Jennie Thornley Clarke’s Songs of the South–won him a nationwide reputation. In recognition of his literary accomplishments, members of the William and Mary chapter of Phi Beta Kappa elected him their president in 1904. Either for his inaugural address, or for a subsequent meeting of that society, he penned the poem, “Music.” Upon Duke’s death, his daughter Mary sought to bring more of her father’s work into the public eye. At her instigation, Dr. Alexander Bruce, Dr. James C. Metcalf, and the Hon. Armistead C. Gordon selected 44 poems, which Charlottesville’s Michie Company published in December 1927 as In My Library and Other Poems.