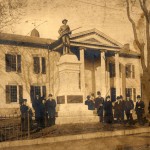 R.T.W. Duke, Jr., with a crowd of dignitaries at the Stonewall Jackson monument in downtown Charlottesville. The statue was dedicated in 1921.

In 1946, Katharine Du Pre Lumpkin wrote in The Making of a Southerner of her father’s childhood on a Georgia plantation. The expectation of slave ownership, she explained, “left a special stamp on men who lived this life. But more particularly,” she observed, “in a special way it stamped their sons, who were reared to expect it and then saw it snatched away.” R. T. W. Duke, Jr., like Lumpkin’s father, found his hopes of a plantation idyll dashed by sectional conflict. Along with Lumpkin, Will Percy, and scores of other whites of his generation, Duke embraced the “Lost Cause,” a way of remembering the conflict that celebrated Southern valor and defended the justice of the Confederate cause. Believers in “the cause” accepted political reunion with Northern states but rejected the participation of African Americans in politics. 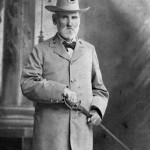 R. T. W. Duke, Sr. did fight in the Civil War, and he placed a high value on communicating specific details of his service to his children. Writing forty years after the conflict, his son recorded everything from the elder Duke’s organization of the Albemarle Rifles in 1859, to his service at First Manassas, to the conflict with General Wise that led him to resign, through his reenlistment and final surrender at Silas Creek. 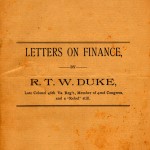 Duke, Sr. displayed pride in his Confederate service outside of the home as well. Even while reporting to his constituents as a representative in the 42nd Congress, he found ways to defiantly claim allegiance to the Confederacy’s memory. Unreconciled to Confederate defeat he remained, in his own words, “A Rebel Still.” Through the vehicle of the Democratic party, he continued the South’s fight by protesting the Fourteenth Amendment and other perceived encroachments on Southern rights.

Moreover, R. T. W. Duke, Sr. co-founded in 1889 the John Bowie Strange Camp of the United Confederate Veterans (UCV). This camp was only the fourteenth of its kind in any Southern state and symbolized the depth of Confederate feeling in the community.

The younger Duke, who–unlike his brother William–could not join the UCV, embraced the program of Confederate remembrance by helping to found the local chapter of the Sons of Confederate Veterans in 1893. In honor of his father, he labeled the chapter the “R.T.W. Duke chapter of the Sons of Confederate Veterans.” According to their first constitution, the group aimed to “perpetuate the memory and gallant deeds of the soldiers of the South in the war between the states: To see to it that no unjust aspersions are made upon the cause for which those soldiers fought: to preserve the traditions and histories of that war, and to arrive at just conclusions as to the reasons governing the South in its course in said war, and especially the reasons governing the course of the State of Virginia. To learn ourselves, and to attempt to teach others true patriotism to our State and the aid by which all proper means in cultivating the spirit of our justice and fraternity between the several sections of whole country, and make the Union a Union for the whole people.” 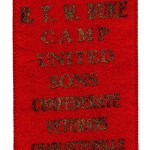 At Left: A ribbon from a meeting of the R.T.W. Duke chapter of the Sons of Confederate Veterans. 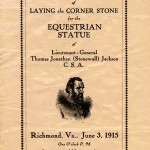 At Right: A bulletin from the 1915 dedication of the equestrian statue of General T. J. “Stonewall” Jackson on Monument Avenue, in Richmond.