R. T. W. Duke, Jr. remembered certain things with special fondness in his Recollections and Diaries. Like so many white Southerners of his generation, he barely missed service in the Civil War and devoted an enormous amount of energy to honoring those who did fight. He also earned a reputation in politics as a powerful orator in the service of the Democratic Party. Beyond his political work and long legal career, Duke also participated enthusiastically in various honorary societies, including the Freemasons. In addition to these very public passions, he also cultivated a private passion for literature and achieved a reputation as an amateur poet. 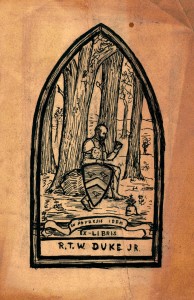