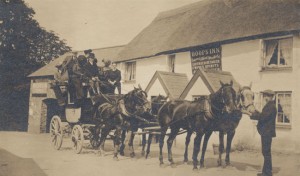 Duke rides in a carriage to a summer vacation spot in 1910. 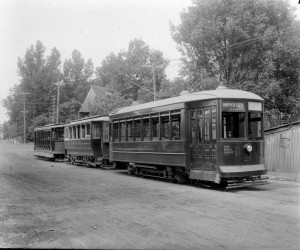 Members of Duke’s family were always quick to embrace new technologies. Remington first began to mass produce a dual-case typewriter in 1878, and by the 1880s, the law firm of Duke & Duke was employing such machines in their office. When Charlottesville made commuting by rail car possible in 1895 with the addition of a Fry Spring line, Col. R. T. W. Duke, Sr. was on hand to deliver a speech.

On several occasions, the Duke men attempted to make a profit on their interest in technology. In 1890, for example, R.T.W. Duke, Sr., R.T.W. Duke, Jr., and William R. Duke became the principle shareholders in the Tug River Coal and Coke Company, a corporation chartered to take advantage of the coal boom in West Virginia. Though unsuccessful, the men tried again in the late 1890s.

Men who could successfully provide large quantities of electricity or ice–necessary at that time for cooling–to railroads or rail car companies stood to gain a handsome profit. Discouraged that the chief corporation providing such services for Charlottesville’s transportation industry was composed primarily of out-of-town investors, R. T. W. Duke, Jr. helped organize the more local Citizens’ Ice and Manufacturing Company in September 1899 and became its first president. Though the company swiftly accumulated a large amount of capital, Duke steered the Citizens’ Ice and Manufacturing Co. into a merger with its competitor in January 1900, forming the Virginia Ice Company. Though the move was unpopular, Duke confessed in his diary that consolidation was the best way to end “a worrying and troublesome affair.”

As Peter Wallenstein documented in a 1991 article in The Magazine of Albemarle County History, Duke’s failed entry into the ice business did not dull his enthusiasm for all things technological. In 1917, he rode his automobile everywhere; paid for electric lights, a home telephone, and an electric stove; and opined when in New York City one hot August day that “an electric fan would have been the summit of earthly bliss.” Though sentimentally committed to the “old days” and to the South of his father’s generation, R. T. W. Duke, Jr. was not ashamed to take advantage of the best the twentieth century could offer. 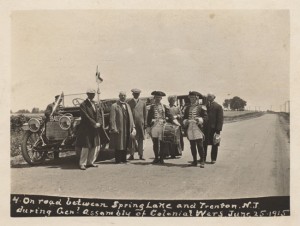 Duke poses incongruously beside an automobile and a Continental Soldier in 1915.