Like his father and older brother, William R. Duke, R. T. W. Duke, Jr. was an active participant in the Commonwealth’s Democratic Party. R. T. W. Duke, Sr. served during Tom’s childhood as the representative of Virginia’s fifth Congressional district, for the then “Conservative” Party. Sounding a theme common to the Lost Cause, Duke, Sr. protested against the Fourteenth Amendment and against the enfranchisement of recently freed African Americans.

The younger Duke never secured a federal position, but he served from 1886 to 1901 as judge of the Corporation Court (now called the Circuit Court), as Commonwealth’s Attorney from 1916 to 1920, and as a member of the Committee to Revise the Virginia Code in 1908. Despite repeated rumors that Duke was interested in running for the governorship or for Congress, which became particularly heated in 1922, he did not, like his father or brother, ever follow through. He was, however, extremely active in assisting other Democrats in Federal races. He criss-crossed the state delivering scathing and enthusiastic speeches on the dangers of “Mahoneism” and “Black Republicans.” 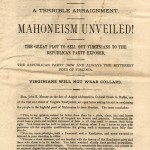 Duke felt a special animosity for William Mahone, who established the “Readjustor” party in Virginia to repudiate Civil War debts and courted enough Republican votes to serve as United States Senator 1881-1887. Feeling that Mahone had betrayed his Confederate birthright and nullified his exemplary service as a Major General, Duke wrote in his Recollections that Mahone “was one of the worst men the State ever produced. Without morals or honesty, his ambition was as boundless as Satans & as bad” (IV: 135). Shown at left is a pamphlet on the dangers of “Mahoneism,” from Judge Duke’s private papers (c. 1882).