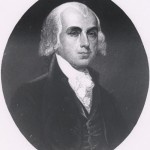 James Madison, fourth President of the United States (1809-1817), was chosen first president of the Albemarle Agricultural Society on October 7, 1817.

The vast majority of white Virginians in the eighteenth- and nineteenth-centuries, including most Cabells, either farmed their own lands or supervised enslaved African Americans who farmed on their behalf. Following widespread trends, Virginia landowners, including several Cabells, attempted to turn their agricultural pursuits into a science. 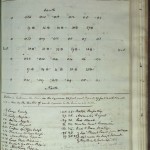 The first agricultural reformers were individuals like George Washington and Thomas Jefferson who applied reason and experimentation to crop production as well as to political problems. Joseph Carrington Cabell emulated these enlightened individuals by paying very close attention to the initial layout of his own crops. Shown at left is a plot of one of his apple orchards, meticulously organized by variety. 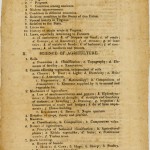 These individuals eventually organized themselves into groups, including the Albemarle Agricultural Society, founded in May 1817. Thirty elite landowners established the group, including Joseph C. Cabell and his better known friends, Jefferson and John Hartwell Cocke. Cabell’s kinsmen Robert Rives, Sr. and William C. Rives also participated and were present in October when the Society selected James Madison (above) as their first president. William H. Cabell, who was also a member of the state society, joined within a few years.

The Albemarle Agricultural Society engaged in frequent efforts to educate Virginians about the most innovative agricultural practices. Shown here is a detail from a lecture series planned in 1822.

Agricultural reform had its limits, however: the Cabells shared with most white Virginians an antipathy toward reforming the entrenched system of enslaved labor that undergirded the agricultural economy. Instead, the Cabells and their allies focused as much on systemic problems confronting farmers in Virginia as on the dirty business of plowing and fertilizing. They sponsored lectures to educate area farmers and, as part of the state society, urged the establishment of a state agricultural college. William C. Rives, although a booster of the University of Virginia, believed such a school to be necessary and even coordinated the purchase of a vacant hotel in Charlottesville for the purpose in 1855. These efforts at reform, like many others, became unimportant in the light of the Civil War which began in 1861.