Specific information about individual Cabells’ involvement in the political process–on both the state and national levels–may be found in the “Contributions” section, under Statesmen. This page is intended to make those contributions more meaningful by identifying the major political movements into which the Cabells and other Virginians found themselves swept up, from the Revolution to Secession. 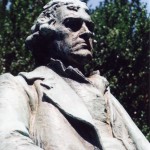 White Virginians in the mid-eighteenth century formed political alliances based on their allegiance to Great Britain, and Patriots faced off against loyalist Tories. By the 1770s, on the eve of the American Revolution, the Cabells were almost uniformly Patriots, committed to the political independence of Britain’s New World colonies. Following American victory, political choices became more difficult in the new republic. Virginians, who had sought liberty so enthusiastically, could not agree how the citizens of the new nation should govern themselves. Both Federalists, who supported the passage of the 1787 Constitution, and Anti-Federalists, who believed the Constitution gave the central government too much power, had strong supporters in the Commonwealth.

After the Constitution became law in 1789, some of the differences that had characterized the Federalists and Anti-Federalists began to manifest themselves in both state and local politics. Though few Virginians seriously hoped to repeal the Constitution, especially after James Madison’s 1791 Bill of Rights brought more security for their individual rights, men from the Commonwealth formed the nucleus of a national movement to guard against the consolidation of power at the federal level. In this, Thomas Jefferson, a Cabell friend and neighbor, led the way. Jefferson and his followers, labeled “Democratic-Republicans” by 1800, sought to keep power as close to the local level as possible. Jefferson helped mentor several young Cabells, including Joseph Carrington Cabell and William Cabell Rives. Initially, virtually all Cabells would have unproblematically claimed adherence to Jefferson’s party. 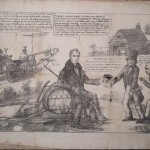 Political cartoon from 1840 found in the Barbour Family Papers (MSS 1486), depicting the Whig William Henry Harrison and his Democratic detractors.

The Jeffersonian legacy fragmented in the nineteenth century, however, and Cabells found themselves in every surviving fragment of the coalition. Some, like Rives, followed the so-called “National Republican” tradition that grew into the Whig party. Among Whigs’ core beliefs was that the federal government should support internal improvements and thereby spur economic growth. Others, like John Cabell Breckinridge, went to the other extreme. In his 1860 run for the presidency, Breckinridge defined himself as a “States-Rights Democrat” and protested the federal government’s attempts to limit the spread of slavery. Whigs like Rives worked until the last moment to try to keep Virginia in the Union but, ultimately, virtually all Cabells fought for the Confederacy.

Other Sources Consulted:
Drew McCoy, The Last of the Fathers (1989)