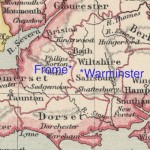 Map indicating the location of Warminster, from whence William Cabell emigrated for Virginia in the early eighteenth century, and of Frome, a nearby center of Cabell influence in England.

Cabells were participants in the massive outmigration of English people in the seventeenth and eighteenth centuries. As England launched more and more colonial ventures–In Ireland, North America, the Caribbean, and elsewhere–tens of thousands of men and women hungry for either food or adventure left the land of their nativity. In the seventeenth century alone, 130,000 English men and women sailed for the Chesapeake (Virginia and Maryland) and 210,000 for the Caribbean. William Cabell, the founder of the family in America, and his cousin, William Mayo, joined this flood of emigrants after the peak years had already passed, in the 1720s. Cabell left for the Chesapeake in approximately 1726, some years after Mayo had headed to the Caribbean. Mayo would eventually join Cabell in Virginia, where the two worked together as surveyors on several occasions. 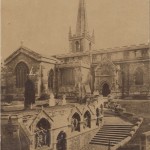 Though family tradition traces the Cabells’ English origins back to a “Walter Cabell,” who participated in the eleventh-century Norman Conquest, the documentary record only reaches the fourteenth and fifteenth centuries. In 1408, one particularly well-to-do Cabell from the town of Frome received permission to build a chantry chapel attached to that community’s cathedral, shown at right. While the Frome Cabells are most likely related to the Virginia Cabells, the oldest ancestor whom the American branch can identify with certainty hailed from Warminster, about ten miles to the east of Frome. In 1572, one “William Cabell” of Warminster leased a property known as Norridge Farm, where he and the next two generations of his family made their living. This William Cabell was the great-great-grandfather of the American patriarch of the same name.

The American Cabell Foundation derived its seal, shown in detail on the Family page, from windows in the Cabell family’s chapel at Frome. Nathaniel Francis Cabell was highly enamored of the device and wrote extensively on the meaning of the Cabell coat of arms. From N. F. Cabell’s research, letters solicited by Alexander Brown in preparation for Cabells and their Kin, and English records, it is clear that the English Cabells were a diverse lot. Among them numbered tenant farmers, alehouse owners, and wool-staplers. William Cabell’s parents, Nicholas Cabell and Rachel Hooper, were dissenters, though many Cabells supported the established Anglican church enthusiastically enough to serve as churchwardens or vestrymen.

When he left his home country, William Cabell achieved more social and geographical mobility than had any of his ancestors in the previous three centuries. He was one of the fortunate ones, for whom the New World’s promise of opportunity proved trustworthy.