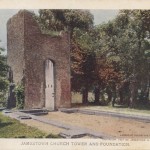 When Englishmen established their first permanent North American colony in Virginia in 1607, they carried their religion with them. The crown, the Virginia Company, and–in 1619–the House of Burgesses each confirmed the (Anglican) Church of England as the established church of the colony of Virginia. The 1907 photograph at left shows the remains of Jamestown’s Anglican parish. From this colonial and relatively homogenous beginning, however, religious expression in the Old Dominion gradually evolved to mirror the diversity of the colony’s inhabitants. The Cabells and Religion page details a few of the specific contributions that Cabells made to the religious development of Virginia, while this page outlines more general themes in Virginia’s religious history.

Virginia Anglicans managed to keep most white residents within the fold throughout the seventeenth century, but practitioners of other religious traditions began to make their presence felt early in the eighteenth century, when new populations carried their beliefs into the Commonwealth. Tens of thousands of men and women of African descent arrived in the colony with their own, divergent religious traditions; these black Virginians are a reminder that non-Christian beliefs have always been present in the Commonwealth. The most organized challengers to Anglican dominance, though, were non-Anglican Christians. Scotch-Irish settlers from colonies to the north, for example, brought Presbyterianism. The influx of Presbyterians increased in 1738 when Virginia’s Governor Gooch invited them to settle the western portion of the state as a shield against Indian attacks. One of these Presbyterians, Samuel Davies, was the first to raise a significant following of African Americans, foreshadowing massive changes in the religious landscape of Virginia. Baptists, too, reached out to African Americans. Shubal Stearns passed through the state in 1754, sparking the steady growth of dissenting Baptist congregations. 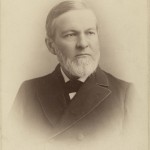 During the Revolutionary War, Virginians dissatisfied with the Anglican Church finally gained the political opportunity to destroy the establishment. Payment to Anglican priests ceased in 1776, and the signing of Thomas Jefferson’s “Statute for Religious Freedom” in 1786 made disestablishment official. Baptists, who were extremely active in campaigning against the Anglicans, and Methodists, who broke from the Anglican Church in 1784 to form a distinctly American church, were the big winners in this ecclesiastical shake-up. By 1830, more than two-thirds of Virginia’s churchgoers attended a Baptist or Methodist Church. Many historians have characterized these denominations as “Evangelical” for their emphasis on individual salvation, an emphasis which led them to welcome both black and white members. Baptist John A. Broadus, shown at right, was one of the leaders of this new religious majority. He preached his first sermon while a student at the University of Virginia and went on in 1857 to become one of the founding professors of the Southern Baptist Theological Seminary.