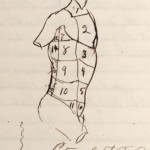 Practitioners of medicine in seventeenth- and eighteenth-century Virginia did not believe in germs or bacteria, but that did not stop them from providing essential services to those around them. Before the massive specialization of knowledge that would characterize the nineteenth century, gentlemen of this era read widely in a number of fields, including medicine and science. Ministers found time to read Shakespeare and Nicholas Culpeper’s London Pharmacopia, while physicians kept Milton, Locke, and Cicero on their shelves. William Cabell, who may not have had any formal training before arriving as an immigrant to Virginia, more than made up for it by purchasing dozens of medical books after his 1726 arrival. Fortunately for Cabell, medical degrees did not then a physician make; the time to read and the resources to purchase rudimentary medical supplies were more essential ingredients. But physicians also needed patients. Some learned medical skills primarily for the purpose of maintaining the health of the enslaved population, others for a wider constituency. Always, the ability to win the confidence of one’s neighbors was the prerequisite to a vibrant practice. 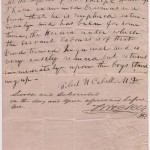 Gentleman physicians of the seventeenth and eighteenth centuries very often practiced their craft on communities of enslaved African Americans. Eager to protect his investment in persons, William Byrd II (1674-1744), for example, taught himself medicine. The most common maladies plaguing enslaved people were respiratory illnesses in the winter and intestinal diseases in the summer. In the nineteenth century, when the practice of leasing enslaved persons was both more common and more regulated, enslavers employed physicians to treat the enslaved. At right is an 1836 certificate signed by Robert H. Cabell, M.D. regarding the painful hernia of Erasmus, one such enslaved person.

William Cabell cared for these types of problems among the enslaved persons he owned, but he also used a straightforward marketing strategy to appeal to free persons. He embraced a “no cure, no fee” policy, in which he charged only those patients who recovered! For those unfortunate ones who passed away under Cabell’s care, he provided a casket free of charge. For Cabell, being a physician went hand-in-hand with his other roles, including surveyor, vestryman, farmer, ferry operator, etc., in a community heavily dependent upon enslaved labor. Gaining favor among his neighbors and turning a profit in these venues were not mutually exclusive. 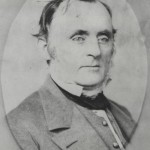 The Cabells established a family tradition of medical care, which continued into the nineteenth century when the practice of medicine became more highly regulated and formal training more of a prerequisite. Dr. George Cabell, Sr. of Lynchburg, son of Col. John Cabell, became the first to earn an official medical degree, from the University of Pennsylvania in 1790. He in turn mentored his cousin, Dr. George Cabell, Jr., who later took his own degree from Philadelphia. The tradition continued with Cabell, Jr.’s son, Dr. James L. Cabell, who became the Professor of Comparative Anatomy, Physiology, and Surgery at the University of Virginia and the president of the National Board of Health, 1876-1883. The image at the top left is from the class notebook of one of Cabell’s students at the University.