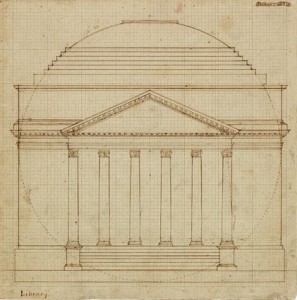 Guide to the Papers

The University’s collection of Jefferson papers comprises some 3,650 items. Most are original documents or contemporary transcripts made by secretaries and family members, but some are more recent transcripts and photographic or electrostatic copies of documents which remain in private hands or in less readily accessible institutional repositories. Of the total, 1610 are written by Jefferson, the rest of the correspondence is to Jefferson or bears a direct relationship to him.

All of the Jefferson material has been indexed and described in A Calendar of The Jefferson Papers of the University of Virginia.

The collection includes numerous architectural drawings by Jefferson, most of them relating to the building of the University of Virginia. The drawings have been digitized and are available online. Please use the links below to learn more.

Overview of the Collection

(Much of the following description is taken from A Guide to the Microfilm Edition of the Jefferson Papers of the University of Virginia 1732-1828 edited by Douglas W. Tanner.)

Rich in information on Jefferson’s private life, the University’s holdings reveal the constancy of his attachment to family and friends as well as the great diversity of his intellectual interests. They testify to his unflagging efforts in his later years to found the University of Virginia and to establish it on a firm footing. These holdings complement the larger collections of mainly official papers at the Library of Congress and of mainly private papers at the Massachusetts Historical Society, as well as somewhat smaller collections at a number of institutions around the United States. The steady growth of its holdings in recent years confirms the University of Virginia as the principal present day institutional collector of Jefferson manuscripts.

Jefferson’s manifest interest in the preservation of his own papers and of historical records generally has been the inspiration for the Library’s efforts to contribute to the reconstruction of his extant correspondence by all possible means. He and his nineteenth century contemporaries and descendants might have difficulty understanding the curatorial zeal with which every jotted scrap of itinerary or grocery receipt is grasped after and catalogued, and the editorial compulsion to assemble the whole of this material for scholarly scrutiny. Only by these means, however, may posterity be assured of a firm documentary basis for a full understanding of Jefferson’s life and times.

The order in which Jefferson maintained his papers at Monticello survived only a few years after his death. Disarrangement by biographers, editors, and the institutions and family members upon whom care of the papers devolved during the nineteenth century resulted in the destruction of almost every vestige of the original order. That order may only be surmised from scattered evidence and approximated, never reconstructed in detail, no matter how great the editorial diligence with which the original order might be pursued.

Jefferson is known to have placed his papers in order by categories of the divisions of his affairs to which they pertained. An incomplete listing exists of the contents of six of his “presses” or filing cabinets, in the hand of his secretary, Nicholas Trist, presumably made in Trist’s capacity as trustee of Jefferson’s estate after his death. This listing shows that Jefferson kept his papers in drawers or bundles on shelves, dividing them into those public in nature and those private. His public correspondence was in combined chronological and alphabetical arrangement by the periods of his public service, while his private correspondence was alphabetical by correspondent. Numerous separate categories existed for reports, opinions, drafts, notes, accounts, deed papers, and trust papers.

This arrangement apparently survived virtually intact until the first major skewing of the papers at the hands of the Congressional library committee and its agent, Henry A. Washington, after purchase by Congress of the bulk of the papers in 1848. Later ministrations only worsened the division and disarrangement. Presently, most institutional orderings of the papers from that original fond are rigidly chronological, sometimes within series more or less artificial in nature. That situation is likely to prevail, because it probably suits the convenience of librarians, historians, and editors better than the more personal but irrecoverable arrangement that Jefferson had worked out.

The University of Virginia entered upon the deliberate collection of Jefferson papers only in the 20th century, long after some other institutions and individuals had taken an interest in their preservation. A small collection, mainly archival in nature, had accumulated in the Rotunda, the central University of Virginia building which Jefferson had designed as the library. This collection was reasonably well housed after 1913, when special cases were secured for that purpose. An inventory in 1928-1929 showed that the University’s Jefferson collection then amounted to only 175 manuscripts and 111 photostatic copies. By 1934 the Jefferson collection numbered 634 items, and growth thereafter was steady as items were located in previously unorganized collections, and new collections were secured by the University.

The official University Archives form the core collection of around fourteen percent of the total Jefferson holdings. It is not known when and how most of these items passed into the keeping of the Library, although it is surmised that many were transferred at some point from the Board of Visitors, and that many others were among the Proctor’s Papers (the University’s chief financial officer in the early years) transferred from the Bursar’s Office. A rough sort of provenance has been established retrospectively over some 350 such items, clearly archival in nature but not otherwise accounted for. These were divided by office of origin into some 240 items from the Board of Visitors (MSS 211-1) and some 110 items from the bursar’s office (MSS 2737-a). Most of the remainder are known definitely to have been among the proctor’s papers (MSS 2737). Remaining items of unknown provenance are included in MSS 38-183-a, 38-628, 38-740, 38-754, 38-755, 38-756, 38-757.

The greatest single jump in the size of the collection came in 1942, with the deposit of a large group of Edgehill-Randolph family papers (MSS 1397). Subsequently purchased by the University, this collection was augmented in 1957 by another deposit from the same source (MSS 5533). Together with a host of ancillary collections which may be traced back to the same fond, given or deposited over the years by family members and others, the Edgehill- Randolph papers today make up more than a third of the University’s Jefferson holdings. Not all of these were among Jefferson’s own papers; many are transcripts later made by secretaries and various family members from the original documents, some of which are presently in other collections. But their bulk constitutes the residue of the great collection amassed by Jefferson himself, and subsequently dispersed among the Library of Congress, the Massachusetts Historical Society, and other institutions including the University of Virginia.

Other collections of papers have yielded numbers of Jefferson documents varying from a single item to a score, chiefly copies that Jefferson sent to various recipients. These donations and deposits began with the Lee family papers (MSS 38-112), the University’s first known manuscript collection, given around 1832. Numerous items of Jeffersoniana have been contributed by institutional and individual collectors, and are also drawn from other collections of family papers. A special category of printed Jeffersoniana has been included from the rare books collections, comprising works dedicated to Jefferson by hand, and those inscribed or annotated by him (MSS 10193 and various other numbers). Many of the above items were purchased through dealers, and their original provenance is uncertain.

Our Jefferson Papers have been microfilmed and may be borrowed through the Interlibrary Loan system.