Reproduced from Montpelier : The Recollections of Marion duPont Scott with the permission of Montpelier, the home of James Madison

Marion duPont Scott (1894-1983) was an internationally renowned Virginia horse breeder and owner of Montpelier, James Madison’s Orange County home. A great-granddaughter of the founder of E. I. du Pont de Nemours & Co., Mrs. Scott grew up at Montpelier. For a time, she was married to Hollywood actor Randolph Scott. She owned and bred several famous racehorses including Battleship, who won both the British and American Grand National Steeplechases, and Mongo, who won more than $800,000 in race purses. When Battleship won the Grand National Steeplechase at Aintree in 1938, Mrs. Scott became the first American breeder to win the race. In the 1920s, she founded the celebrated Montpelier Races, still held each November at Montpelier; thousands attend each year.

In 1985, her important collection of books and periodicals on the history and practice of equestrian and related sports was bequeathed to the Special Collections Department at the University of Virginia. The collection reflects Mrs. Scott’s lifetime interest in and patronage of racing, coaching, hunting and horse breeding. Along with her generous gift of approximately 1,200 titles, she gave an endowment fund that would allow the University of Virginia Library to continue to build the collection, as well as a monetary gift to be used for the construction the new Special Collections Library Building. Mrs. Scott’s collection is at the same time the working library of a horse breeder and the library of a rare book collector; it contains items of interest to the historian and horse enthusiast alike, with periodicals and books both antiquarian and modern.

The collection also contains a variety of books in the allied fields of horseshoeing, veterinary medicine, hunting dogs, falconry, game fowls and life on the old coach roads of America and England. Some of the highlights of the collection include: more than twenty books illustrated by the famous printmaker Henry Thomas Alken, a number of which include hand colored engraved plates; titles dating from the 17th century by Thomas De Grey and Gervase Markham; Sporting Embellished by Large Engravings and Vignettes Illustrative of British Field Sports edited by “Nimrod,” a.k.a. Charles James Apperley, and published in 1838; the proof copy and original drawings for Siegfried Sassoon’s Memoirs of a Fox-Hunting Man; and The Cracks of the Day (1843) and English Race Horses (1844) edited by Wildrake, a.k.a. George Tattersall. 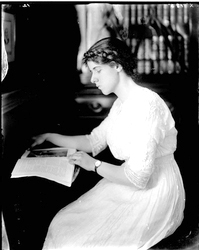 Equestrian-related fiction is also represented in the collection. There is a complete set of the first editions of Robert Smith Surtees, creator of the colorful sporting characters Mr. Sponge and Mr. Jorrocks. There is also a group of 20 titles by contemporary British equestrian mystery writer, Dick Francis, including several first editions, a signed copy of Twice Shy and an uncorrected proof copy of The Edge.

One of the collection’s major strengths lies in its long runs of eighteenth-, nineteenth- and twentieth-century English and American periodicals. Included are a 150-year-long run of the British Racing Calendar (1773-1924); The Sporting Magazine (1792-1837); A Historical List of Horse-matches Run (1728-1768); the first twenty-eight volumes (1869-1951) of Registre des Chevaux de pur sang published by the French Ministry of Agriculture; General Stud Book (1827-1953) and American Stud Book (1868-1932); Country Life (1897-1965); The Bloodstock Breeders Review (1912-1963); and Blood-horse (1935-1992). Of particular interest to the historian and the restorer are the many nineteenth- and twentieth-century manufacturers’ catalogues of carriages, saddles, tack, stable fixtures and racing silks.

Since the time of the original gift, the Library has acquired more than 700 new items for the Scott Collection, including the Charles James Apperley archive containing some 1,200 letters and manuscripts. Apperley, writing under the pseudonym “Nimrod,” reported primarily for The Sporting Magazine in the early nineteenth century–the golden age of the British hunt. As one of history’s first sportswriters, Apperley produced many books and articles popular on both sides of the Atlantic. Another important addition to the Scott Collection is a group of eighteenth- and nineteenth-century Virginia stud broadsides. The earliest, depicting the thoroughbred Democrat, dates from 1797, one year earlier than any Virginia stud broadside previously recorded. Important pieces such as these continue to be added to the collection using Mrs. Scott’s generous endowment.

Most of the volumes of the Scott Collection have been cataloged and records are available in the Library’s online catalog, VIRGO.