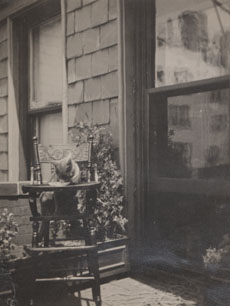 Johnny Reb on the porch

In Volume V of Memories Lillian writes about 1914 and 1915, until the journal ends unexpectedly. This final volume is filled with exciting accounts of Lillian’s seventeenth and final trip to Europe, which took place during the opening months of World War I. Lillian writes that it was “a trip of hardship, but of great interest, and because of this interest I have copied it from my diary fully” (81). Because Lillian is writing from her diary written at the time into Memories, the predictions and rumors that form regarding the war are particularly fascinating. Lillian recounts a handful of events following the Taylors’ return from Europe, and the volume ends with an account of her roof garden at the Novaro. There is no concluding commentary, and the journal ends less than half full with a plethora of inserts filed at random in the remaining blank pages.

The highlight of this volume is certainly Lillian’s account of the beginning of World War I from Marienbad, Austria (now in the Czech Republic), where she and Bob were staying.

Austria at the start of World War I. Early in July of 1914, Lillian and Bob settled down for an extended stay in Marienbad, Austria, in hopes that the springs there could relieve Bob’s discomfort. Shortly thereafter, on July 28, Austria declared war on Serbia for the assassination of Archduke Francis Ferdinand. Despite the excitement that these events caused, Lillian writes that the U.S. Embassy continued to advise that it was safe to travel Austria; the Taylors decided to stay (7). Fears and rumors regarding the war begin to circulate almost immediately, and on July 30, Lillian writes, “Germany and Russia [are] growling at each other, but Bob says war between them is unthinkable” (10). Only two days later, on August 1, Germany declared war on Russia and World War I began in earnest. Lillian watches events in frightened awe, asking, “Can such things happen in our Century?” (19).

Despite the tense conditions in Austria, Lillian and the other Americans in Marienbad still managed to have some fun and build a sense of community. Lillian began learning German and teaching it to other travelers; the women would walk out to a small forest glade for their lessons. Some of the Americans also opened a U.S. Embassy on the first floor of a Bishop’s house, to have a central meeting point for the American travelers in Austria. Lillian recounts the fun the Taylors had at a party thrown at the makeshift embassy.

As the Taylors and other Americans finally prepared to leave Marienbad in late August, Austrian fears of information leaks continually interrupted their preparations for departure. The Americans were not allowed to carry any letters out of the country, though they were constantly asked to do so by Austrians and English visitors. Once an unknown Russian woman came to visit Lillian, and asked Lillian to carry letters to her daughter, who was traveling in England. Although the woman tried to bribe Lillian, she still refused to carry the letters. Lillian later mentioned the incident to a shopkeeper; on her way home through the park she was stopped by several policemen and questioned regarding the Russian woman. After this incident Lillian writes, “Oh, I am glad we are going” (45).

A few days later the hotel manager informed Lillian that one of her party was carrying a letter addressed to Sir Edward Grey, the then British Foreign Secretary, and that the group would never make it out of Austrian with this letter. Lillian remembers, “I told Bob, and he said I must find it, for it was dangerous. I said, ‘Franz told me that, he said this was war’” (47). Lillian discovered who had the letter, and made the woman return the letters publicly during dinner that evening. After this, their departure went as smoothly as wartime travel might go.

Vagabonds at the Gallery. One brief story from Lillian and Bob’s trip home seems characteristic of the Taylors. Once they had reached The Hague, dirty, sooty, and tired from travel, they dropped off their luggage at a hotel and promptly visited the Picture Gallery. Lillian recalls, “One of the guards at the Gallery said, ‘You poor Americans.’ We must have looked forlorn. […] [My suit was] very smart when fresh, but the white ruffles were black, the suit rumpled and dusty, and I, just tired. Bob no better off, and as he is so dark, he looked fairly black” (61). Despite their disheveled condition, Lillian writes that the artwork “made us forget our fatigue” (61).