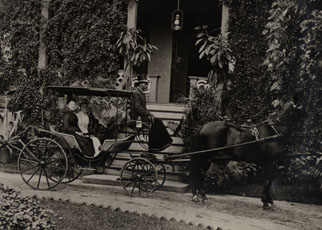 Lillian and her mother going for a ride

Volume I of Memories includes many entertaining stories from Lillian’s childhood, beginning when Lillian was about four years old, until her first trip to Europe at the age of sixteen. She writes about her family and their homes, her education, and her escapades with her sisters. At times she jumps ahead, connecting stories from her past with events later in her life. In this volume she has included photographs of portraits, needlework, newspaper articles, and letters.

A few significant highlights include photographs of her parents and letters from James A. Garfield and Rutherford B. Hayes

Highlights from Volume I

Flowers for the tenor. Lillian’s parents encouraged their children to appreciate the performing arts, especially opera. As young girls, the daughters would attend performances as often as possible. Lillian recalls watching the famous tenor Campanini perform every time he came to Baltimore. She, Sister Minnie, and Sister Emma used to send him flowers after every performance, with a card that always read, “From three little girls.” Even after the girls were grown, and Campanini’s voice began to give way to age, they would send him flowers accompanied by a card bearing that same message whenever he performed in Baltimore: “Years passed, the three little girls were grown, but the card was unchanged” (110). See pages 110-111.
Insane asylum escapee. Among the many memories Lillian records at the Summit, the Garys’ summer home in Catonsville, Maryland, is this frightening tale. One summer evening when Mr. and Mrs. Gary were out of town, their daughters were home with two girls from another family. Late at night Sister Madeleine crept into the room where Lillian was sleeping in her mother’s bed, and roused her sister. Sister Madeleine whispered to Lillian, “There is some one getting in the reception room window.” Lillian convinced Sister Madeleine that she was imagining things, but told her that if she heard the noise again to come wake her again. A few moments later the girl returned and told Lillian that the man was now inside the house, and that the window shade had made a noise.
This time Lillian believed her. The little sisters called for the butler, Lee, who was supposed to be sleeping in the house while Mr. and Mrs. Gary were gone. But the girls had convinced him that The Summit was safe enough for him to sleep in his normal quarters. Realizing she was on her own, Lillian grabbed her father’s pistol and stepped quietly to the top of the stairs. When she heard footsteps on the staircase, she called over the rail, “Stop where you are, or I’ll shoot.” The other servants fetched Lee, who the girls told to come in from the back porch. Lillian, with the pistol, led the girls downstairs to meet him. She gave Lee the pistol, but when the searched the house they only found an open window in the reception room.
The next morning the overseer came to Lillian and told her that there was a man sitting in the stables, muttering to himself and acting strangely. She recalls, “I went to see. There sat a man eating green apples, evidently deranged.” Lillian ordered the servants to give the man a good breakfast while someone called the state insane asylum at Spring Grove to see if any of their patients had escaped. Indeed, the very man Lillian had chased off in the night was an escapee from the institution. The Garys’ driver returned him to the asylum. See pages 146-149.

These stories are from the Garys’1881 trip to Europe. On June 14, 1881, Mr. and Mrs. Gary left for a tour of Europe with their three eldest daughters, Lillian, Minnie, and Emma. They sailed from Baltimore on the S.S. Nova Scotia, and spent three months visiting England, France, Switzerland, and Germany. See pages 205-257.

Christening of the Arctic Expedition. As the Garys were leaving for Europe the Greely Arctic Expedition was setting off on the first leg of its journey. By chance, they left America on the same ship as the Garys, the Nova Scotia. Charmed by Lillian, Lieutenant Lockwood asked her to christen the launch for the expedition. Later that day, Lillian stepped into the launch boat for the expedition, and in the midst of rousing cheers broke a bottle of champagne over the bow of the boat, christening her the Lady Greely.

Despite this good luck gesture, the Greely Arctic Expedition did not go well. Many members of the expedition died, and some were reduced to cannibalism to survive. Years later, Mrs. Taylor came across a newspaper article citing Brig. Gen. David L. Brainard as the last survivor of the Greely expedition. Mrs. Taylor wrote to Brig. Gen. Brainard, asking him if he remembered that afternoon many years ago when a sixteen-year-old young lady christened their launch. In his kind reply, inserted in Memories, Brig. Gen. Brainard writes, “I recall every incident of the christening of the launch, Lady Greely, and I specially remember the charming young girl whom Lockwood had asked to do the christening. I have never forgotten the champagne, as it was the last that I drank for over three years” (241). See pages 208-217.

The dressmakers. Lillian’s favorite memory from her trip to Europe is having a dress made at the House of Worth. Charles Worth was the most famous designer in the late nineteenth century. Mr. Gary had promised his three daughters dresses from Worth’s earlier in the trip, but when Mrs. Gary took the girls for fittings, she convinced them that Worth dresses were unnecessary expenses. Instead, she had them fitted at another dressmaker’s studio.

When Mr. Gary arrived home that evening, he asked the girls if they were excited about being fitted for their new Worth dresses. They explained to him what had happened, and he decided that they still needed Worth dresses. While Mrs. Gary was taking a nap, he tried to sneak them out of the house for fittings. Awakened as they were leaving, Mrs. Gary knew exactly what her husband was up to, and good-naturedly agreed to come along. The three daughters received matching street suits in different colors – Lillian’s was dark blue with steel and blue buttons, Sister Minnie’s was dark green with the same buttons, and Sister Emma’s was a soft brown. Lillian still remembers how much she loved her Worth dress. See pages 227-231.

Crossing the Mer de Glace. During their visit to France, the girls and Mr. Gary had an adventure in the Alps. They spent a day hiking and riding mules in the mountains, crossing the Mer de Glace. Lillian remembers how beautiful everything was, and she and her sisters had a fine time despite the dangers of the mountains. At one point her mule started at another group coming down the narrow trail, and Lillian was nearly pitched over a precipice. The guide calmed her mule, and Lillian rode to safety. Mr. Gary did not enjoy himself on this adventure. Lillian recalls that her father “wished no one to know what a fool he had been to cross [the Mer de Glace].” The girls, however, had a wonderful time. See pages 236-239.