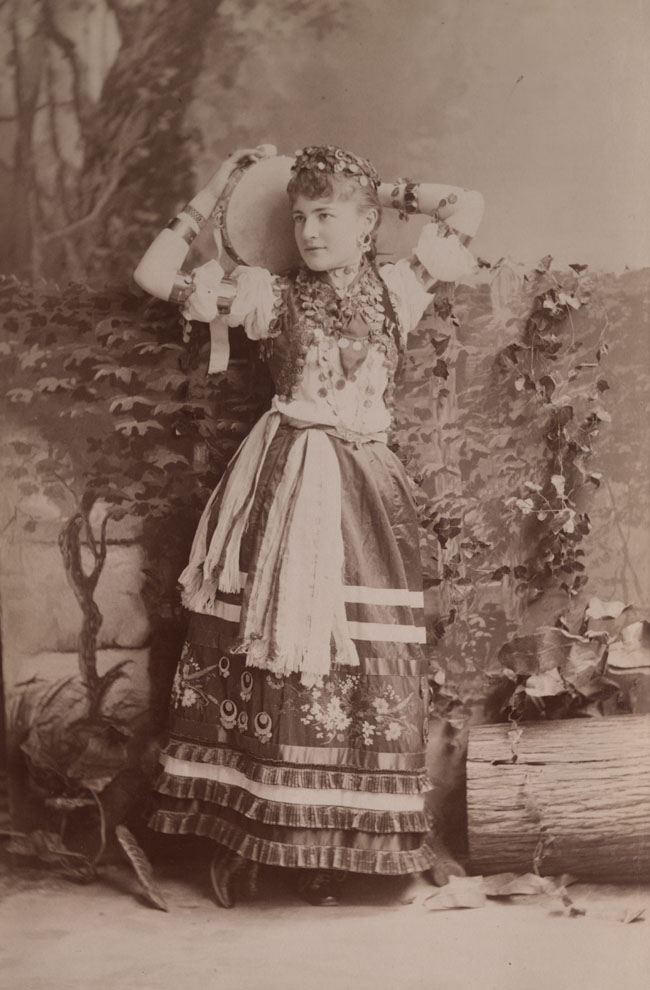 Lillian’s second volume of Memories covers approximately 1881 to 1895, when Lillian was between 16 and 30. Her stories include another trip to Europe, frequent travels throughout the United States, the Gary girls’ debuts, and the marriages and engagements of the family. She also moves forward in time, writing about current events, such as Germany’s surrender during World War II in early May of 1945. As in Volume I, her stories portray a young woman who treasured her close-knit family.

This volume also contains several menus from her father’s birthday dinners, numerous letters from Lillian’s family and friends, and wonderful photographs of the sisters.

Traveling through Europe. On her second trip to Europe, Lillian traveled with Brother Stanley, Sister Minnie, and Sister Emma, chaperoned by their ex-governess, Miss Gillet. The Garys’ four eldest children visited over twenty-five cities during their tour, including delightful stops in Lyons, Pisa, Geneva, Dresden, and London. Lillian especially enjoyed visiting Munich, where the group went to the races, spent time in the Royal Library, and toured “The Dead House.” Lillian refused to enter “The Dead House,” recalling a frightening scene from one of her favorite books, Baroness Tautphoeus’s The Initials. Instead, she sat out front under a shady tree while the rest of her group saw “where all dead go, high and lowly, and with bells on hands and feet to wait to see if any spark of life is there – staying two days” (36). For the tour of Europe, see pages 24-65; for the visit to Munich, see pages 34-37.

A buggy ride and a bet. One summer while the family was visiting Bar Harbor, John Gill, Jr. asked Lillian to go for a drive with him. She refused at first, stating she had a dinner engagement that evening. When he told her they wouldn’t stay there a minute, that he wanted her company for the drive, she agreed to go. She remembers, “[t]he minute I was in like a flash we were off. I was warned it would be a fast drive. It was” (100-101). When they reached the Northeast Harbor, Mr. Gill turned the buggy so quickly that Lillian thought it was going to flip over. Luckily, the pair made it home safely, where Mr. Gill’s friends greeted them by saying, “You have won” (101). That was when Lillian discovered that Mr. Gill and his friends had made a bet that he could not make the drive to the Northeast Harbor in a certain amount of time; the terms of the bet required that there be two people in the buggy. Mr. Gill told Lillian he asked her to go with him “because [she] was light, and not afraid of horses” (101). In thanks for her participation, Mr. Gill sent Lillian a large box of chocolates. See pages 100-101.

Firefighter Lillie. In 1885, Lillian pulled down a curtain that was burning in their home at Linden Avenue, and put out the fire. Her burnt hands were bandaged, and visitors stopped by to sympathize with her. She says, “The result was a joke” (104). When they heard what had happened, the Baltimore City Fire Department made Lillian a member of their volunteer firefighter department. She was assigned to Engine Number 7, and given a fireman’s badge, number 807. Inserted in Memories are letters from the Board of Commissioners and Chief Engineer for the Baltimore City Fire Department, outlining her duties as a volunteer firefighter. See pages 104-107.

Who’s who? Lillian recalls having a wonderful time with her sisters Minnie and Emma at the Cornell commencement in 1886. She writes of them going to the dance the first night, and learning that their partners were confused because the three sisters looked so much alike. After the girls discovered that their partners were identifying them by the colors of their dresses, they decided to have some fun the next night by dressing alike. Years later, when Lillian was at a dinner with her husband in New York, a family friend surprised her by remembering those commencement dances, and the trouble the girls’ partners had telling them apart. See pages 114-116.

Courting. Near the end of Volume II of Memories, Lillian writes for the first time of being courted by her future husband, Robert Coleman Taylor (Bob). In January of 1895, the Garys visited New York, where Bob surprised the family by meeting them at the train station when the arrived. That night he sent Lillian red roses, and took her to see the opera Don Giovanni. After the Garys returned to Baltimore, Lillian stayed in New York with family friends, the Trusts. She writes, “My New York visit was pleasant. Bob was attentive, taking me often to the opera” (208-9).

On her last night in New York, Bob sent Lillian a bouquet of violets; until that night he had always sent her roses. Lillian had forgotten that violets had a special significance for Bob, until Sister Adelaide wrote her the following note in a letter: “Was it Ernest, or Bobby who sent the violets? Sister Minnie said that the latter remarked to her one night while she was in New York, and was wearing violets that he could truthfully say, no girl had ever received violets at his expense, and was proud of it too, see what you have brought him to” (210). Lillian then remembered that Bob had decided he would only sent violets to the woman he wished to marry. See pages 203-211.

Although Lillian had to leave New York, Bob continued to court her whenever he was in Baltimore.