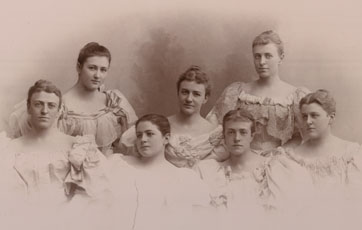 In Volume III of Memories Lillian discusses many events important historically, as well as to her personally. Among these are President McKinley’s assassination and death, and the Great Baltimore Fire of 1904, which burned more than 70 blocks of the city. Happier memories include six of the Gary girls’ weddings (Sister Minnie’s was recounted in Vol. II), and recollections of Lillian’s time as her father’s hostess in Washington D.C., while he was serving as Postmaster General. As in the other volumes, Lillian mentions how much she enjoys working on Memories: “I should plan Memories more, not just write along. Then it might read better, but it would also be work, now it is just pleasure, the pleasure of reliving my happy life” (147). The volume covers the years 1895 to 1904.

Among the highlights of Volume III are letters from President McKinley and Cardinal Rampolla, and several photographs of the extended Gary family.

Lillian’s wedding. Lillian Marie Gary and Robert Coleman Taylor were married on November 24, 1900, after a three-year engagement. Lillian wanted a small wedding, but after the Garys decided to invite their friends from Washington, including President McKinley, to the wedding, it became quite a large event. Although Lillian wanted only Sister Madeleine as a bridesmaid, Sisters Minnie, Emma, Adelaide, Ida, and Jessie decided that Lillian really needed several more bridesmaids. Although they asked Lillian if they could all wear white taffeta dresses, they didn’t tell her that they all planned on standing with Sister Madeleine during the ceremony. Lillian recalls, “As I turned, for Sister Madeleine to put my veil back, I saw all of [the] Sisters in their white taffeta dresses, standing close behind me. It was a lovely act, for although not bridesmaids, they were close around me, in this the most solemn moment of my life” (126). See pages 120-130. Lillian copied the names of those who signed her Wedding Book into Memories, and recorded the names of others who also attended. This list is found on pages 130-134.

Homesickness. After their honeymoon, the Taylors settled in New York, far from Lillian’s family in Baltimore. As she got ready to go Christmas shopping one morning shortly after their move, she saw three women greet each other on the street, and immediately began to miss her sisters. Instead of heading out Christmas shopping, she went to Bob’s office and told him of her homesickness. Bob took about twenty minutes to finish the project he was working on, and went shopping with Lillian for Christmas gifts.

After they picked out a gift for Lillian’s mother, Lillian asked the clerk to ship the gift to 1200 Linden Avenue in Baltimore, but Bob stopped her. He surprised her by telling the clerk to ship the gift to the hotel where the Taylors were living in New York City: “‘Send them to the Bristol Hotel, we can easily carry them,’ said Bob. ‘But we are not going.’ ‘Yes, we are, it will be fun to spend Christmas in Baltimore.’” This thoughtful surprise made Lillian very happy; she writes, “How changed the world seemed!” See pages 138-9.

Tea and cake in the ashes. On February 15, 1902, a fire started in the storehouse across the street from Lillian’s brownstone apartment in New York City. After making sure the Fire Department had been alerted, Lillian and her maids armed themselves with buckets of water and watched from a window in the Taylors’ home. After a little while, one of the maids informed Lillian that her dining room window sills had caught fire. As Lillian prepared to leave the room she was in, all of her windows collapsed. Lillian requested that the fire chief let her remain in the apartment, as long as she stayed out of the way; he agreed, and told her he would come for her if they decided to abandon the apartment. Lillian watched as the fire raged; eventually the firemen gained control of the fire, and even managed to save Lillian’s books.

Meanwhile, Bob had been getting phone calls at work; people were letting him know about the fire across the street, and telling him that Lillian and the apartment were safe. After several such phone calls, Bob began to get nervous and decided to come home. Lillian remembers, “Someone from an apartment on the north side of our house, hearing I was wet, sent me in tea, and a big piece of chocolate cake, I put it on the piano stool, and sat in my dripping clothes, to enjoy it. Bob came in, alarmed, saw me having tea. I remember his face, as he looked at me, saying, ‘If I live to be a thousand I will never understand a woman; finish your tea, find dry clothes, and let us get down to Mother’s’” (184). Although Lillian writes, “It was a long time before the apartment was restored” (185), the Taylors were able to move back into their home. See pages 180-5.

In 1899, Lillian traveled to Europe with her parents, Sister Jessie, Sister Madeleine, Jim Gary, Sister Minnie and Harry James, their daughter Lavinia, and Mr. and Mrs. James. They traveled throughout Italy, and visited Cardinal Rampolla and the Vatican gardens. See pages 58-85.

In 1900, Lillian, her parents, and Jim Gary traveled to Mexico. After being presented to President Diaz, they visited Pueblo, Cholula, Orizaba, and Guadalajara, among other places. During the train journeys to and from Mexico, they also visited San Antonio, Las Vegas, and Denver. See pages 97-107.

During their first trip to Europe, the Taylors visited Falmouth, London, and Paris, among other places. While they were abroad, they heard of President McKinley’s having been shot; upon returning to America, they were informed that he had died. See pages 166-170.

Lillian considered the highlight of the Taylors’ 1904 journey to Europe to be their trip to Weimar, where Lillian and Bob visited the homes of Goethe and Schiller, and went to the cemetery where their coffins are displayed side by side. See pages 141i-157i.