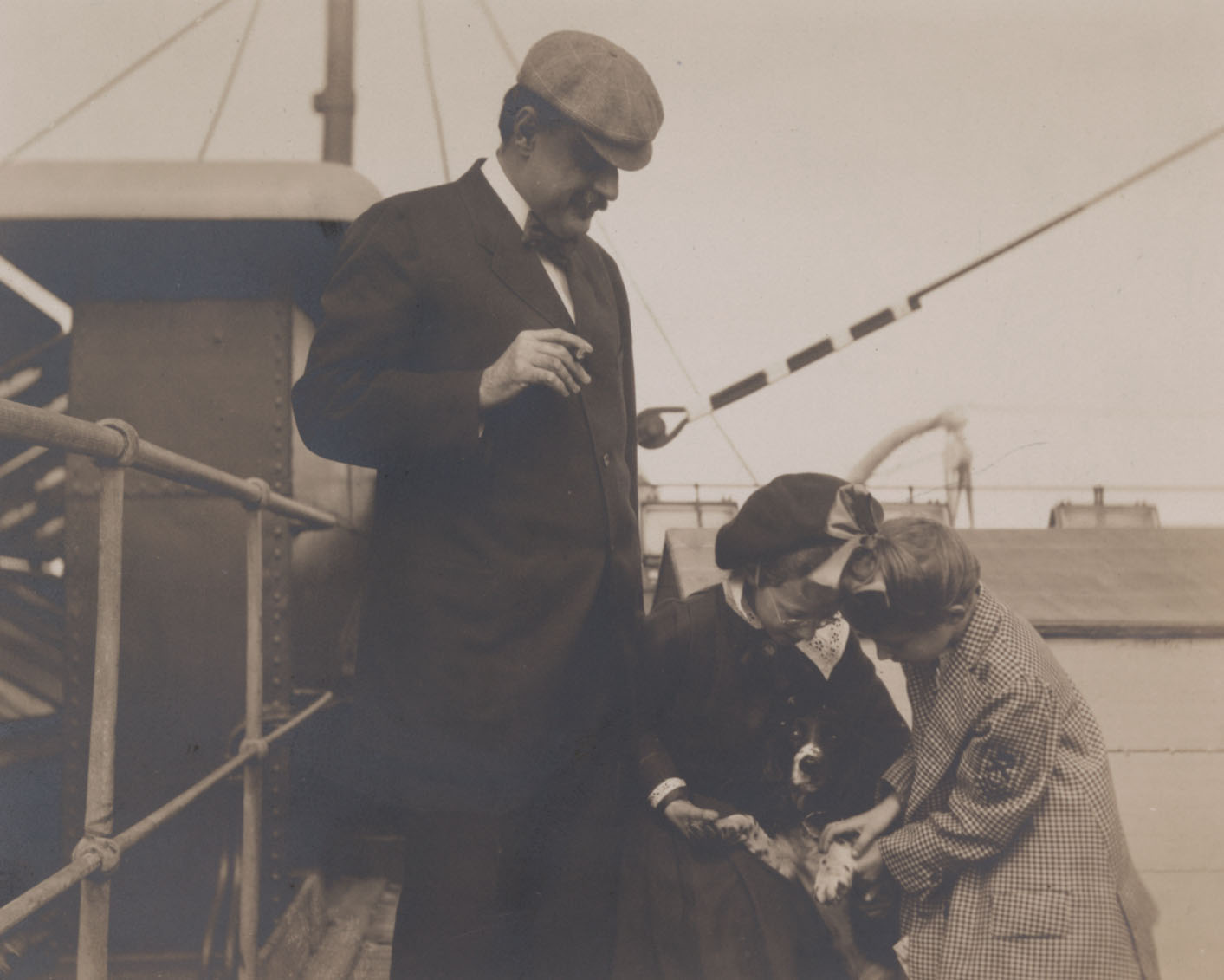 Volume IV of Memories covers the years from 1904 to 1914, when Lillian was between 39 and 48. This volume includes several amusing stories about the Taylors’ travels, as well as many other endearing vignettes. The theater also plays a major role in this volume, especially once the New Theatre opens only two blocks from the Taylors’ home. Lillian also references other noteworthy historical events, including the death of President McKinley, the closing of the Knickerbocker Trust, the sinking of the Titanic, and the construction of the Panama Canal.

This volume also contains several sketches Lillian made, including a drawing for her parent’s fiftieth anniversary, a favorite hat of hers, and a beautiful vase. It includes photographs of her sisters and of her new home just south of Central Park.

Brilliant Standards for Propriety. In this episode, Lillian fondly recalls when disaster struck Bob at a dinner given by Mrs. Henry Dimock, and she had to rescue her husband:

“I think it was at this dinner that Bob said across the table to me, ‘See what has happened.’ I saw—the buttons on his white vest were not fastened in after being to the cleaners, and they had fallen out and his vest was open. I thought quickly, then got up, walked around the long table, took my big diamond cluster from my dress, made my husband stand up, and I fastened his vest with my blazing diamonds. Everyone laughed, and the men began testing their vests to see if their wives would come to their rescue” (29).

Car Trouble? Try Towing by Oxen. During their 1908 trip to Europe, the Taylors, Mrs. Sinclair, and George (Lillian’s brother-in-law) repeatedly encountered car trouble—flat tires, broken parts, etc. Then, during a “hot dusty drive to Tarbes” the car stopped dead while going up a hill. While their chauffer hitched a ride back into town on a market cart, to try to get assistance, Lillian and her companions lounged under a tree: “Consternation, then resignation, and at last cheerfulness.” They were driven back to town while a Panhard towed the Mercedes they had been traveling in, with some help from oxen to push the car up the big hills.

Later, on their way from Tarbes to Luchon, the car sputtered several times before finally breaking down 13 kilometers outside of Tarbes. George started off for Tournay for help, while the others waited. Between George’s search for assistance and a bit of good luck, two cars arrived to help tow the unreliable Mercedes to town. Lillian remembers that “the two automobiles were harnessed to ours, like a pair of horses, but such un-ruly horses! If one went a wee bit too fast, snap went the rope, if one lagged behind, its cable broke, and imagine 6 French chauffeurs talking at once!” Lillian recalls their amusement at this situation: “We got in giggles, all but Mrs. S. who said we were hysterical. At last we got into the French car, leaving the Panhard to bring in the Mercedes.” Following this event, the group abandoned auto travel for the trains; on their next trip, they decided to stick to train travel from the beginning. (135-137)

Little Jim Gary’s Christmas Gift. For the Christmas of 1908, Lillian decided to surprise her father by reminding him of his childhood. She sought out various books and trinkets from the early 1830s, and gathered them in a stocking as his gift, complete with a letter from Santa to “Little Jim Gary” apologizing for the belatedness of the gift.

“I gathered together in Albany all the little books and toys, published in about 1832. My old friends in the shops were helping me. In the stocking was a ‘Mother Goose’ of 1832, an early New England Primer, a spelling book, and an Arithmetic in Verse of about 1833. 2 Almanacks, one of 1832, one of 1833. Some coins of 1833, a tiny child’s mug, the coins were in a little box about this date, with a glass top. I put the odd stocking [the remaining pair of a dozen gray silk socks that she had brought her father from Europe] on top of the filled one. Tied them up in a news-paper of 1833, put a letter from Santa Claus on it, tied with red ribbons. It was a great success. Mother telephoned ‘Our gifts are in the shadow of yours. Your father has done nothing but read those little books. He says he had that spelling book, and arithmetic when he went to school.’” Lillian included a copy of the letter from Santa in her journals. (142-3)

Playing the Southern Card. Lillian and Bob had been discussing moving for a while, but the apartment building that they were interested in didn’t have any openings. Lillian, however, was lucky enough to encounter the manager just after he discovered that there would be a vacancy. The apartment was absolutely perfect—exactly what she had been seeking. Unfortunately, her hopes were dashed when she discovered that there were no pets allowed—which meant that her cat would be left homeless. But Lillian wouldn’t give up the apartment quite that easily, and worked on the manager:

“‘Would you give up that apartment for a cat?’

“‘You don’t know our cat, he is enormous, all silver grey. His name is “Johnny Reb,” and if you tell me, a man from Mississippi named Davis [the manager] would turn a “Johnny Reb” from his home, I will not believe it.’

“He gave me a laughing look, ‘“Johnny Reb” comes, Mrs. Taylor, only bring him in shut in a basket.’”

An elated Lillian agreed, and rushed home excited to tell Bob about the apartment. The next morning Bob looked at the apartment and signed the lease.

Here, Lillian takes a moment to recall how Johnny Reb got his name:

One morning she discovered a little grey kitten with blue eyes, sitting on a pile of soiled laundry. As Lillian reached down to stroke him, he suddenly scratched her with his sharp little claws. Lillian laughed, and decided that since he was “a fighter in grey” his name would be Johnny Reb. Later that evening she surprised Bob by letting the kitten wander into the sitting room with a note tied around his neck: “My name is ‘Johnny Reb,’ may I live here?” Bob, immediately charmed by the kitten, picked him up and placed Johnny Reb inside his vest. Johnny Reb stayed with the Taylors until his death four years later. (238-41)

Death of Sister Madeleine’s Husband, Andrew Whitbridge. While Volume IV of Memories is filled with entertaining stories such as those above, it also contains less happy recollections, including almost constant concerns of illness within the family. With the sudden death of Andrew Whitbridge, Sister Madeleine’s husband, Lillian mourned “[t]he first break in our close family circle.” Andrew had become ill, and was to be operated on for intestinal adhesions. After a stretch of ups and downs, during which he was well at times and very ill at others, the operation was moved up; sadly, it was ineffective. When Lillian arrived in Baltimore, Sister Emma met her at the train station, bringing the news of Andrew’s death. Lillian commends Sister Madeleine’s bravery during this time, and offers an account of Andrew’s funeral. (225-7)

Travels. In Volume IV the Taylors continued their tradition of traveling to Europe annually. In addition to returning to their favorite haunts, such as Germany and France, they also visited several new locations, including the Panama Canal and Scotland.

In 1912, Lillian and Bob sailed with Lillian’s father on a trip to the Panama Canal. After stopping in Havana, Cuba, they continued on to Panama. Lillian was stunned at the sight of the construction, and states that she was “filled with pride at the great canal.” As she watched the workmen, she noted that they were “clean and in good condition.” The canal brought Lillian a sense of national pride, which she mentioned several times before the travelers begin their trip home. She also recalls that they sailed in high style: electric fans in all the rooms, and ice cream served every afternoon. It was during this trip that the Taylors and Mr. Gary learned of the sinking of the Titanic. Memories reveals Lillian’s shock at the disaster; Mr. Gary became the chairman of a subscription to gather money for the survivors of the wreck. (228-237)

The next year, in 1913, the Taylors visited Scotland after a stop in France. Lillian adored Scotland, all except Glasgow (which she thought was too noisy because there were so many drunks). As Lillian and Bob traveled to Aberfoyle, Lillian offered to recite Sir Walter Scott’s The Lady of the Lake for Bob—he promptly begged her to abstain. This was one of Lillian’s favorite poems growing up, and in Volume I Lillian recalls that she used to torture her little sisters by reciting sections of the poem from memory while they made their beds each morning. Lillian says that the trip to Scotland was the nicest trip that she and her husband took. (269-78)