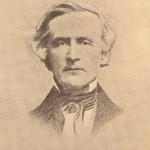 The son of Nicholas Cabell, Jr. and Mary Carter Cabell, Nathaniel Francis Cabell was devoted to his family and to Swedenborgianism, a pietistic and ecumenical sect of Christianity named for founder Emanuel Swedenborg (1688-1772). He graduated from Hampden Sydney in 1825 and from law school at Harvard University in 1827. At that time, he tentatively embraced the Presbyterian faith of his parents, believing that it was “the duty of all who have embarked in the religious life to join some standard,” even though he found the severe Calvinism unsettling. He remained a member of that church at the time of his 1831 wedding to the daughter of General John Hartwell Cocke, Anne Blaws Cocke.

Cabell demonstrated his love for his family through a passionate study of their history and through his faithful correspondence with them in times of trial. He was a favorite correspondent of his uncle, Joseph Carrington Cabell, for example, and offered him advice, encouragement, and even financial assistance during his elder kinsman’s efforts to build the James River & Kanawha Canal. During Joseph C. Cabell’s period of greatest personal need, at his forced retirement from the canal company in February 1846, “Francis” Cabell, as he was known, consoled him: “I could have wished that you might be permitted to unite Eastern & Western Virginia,” he wrote on February 16, “But though this may not be, you have already done enough to ensure you an honorable fame, & the approbation of your own conscience.” A personal friend of Alexander Brown in his later years, Cabell shared with him the desire to preserve the memories and achievements of his ancestors and wrote several unpublished manuscripts of family history, including “Cabellana” and “Carringtoniana.” He also edited, albeit anonymously, the correspondence between Thomas Jefferson and Joseph Carrington Cabell relative to the establishment of the University of Virginia.

In 1837, Cabell took the critical step in his journey of faith and left the Presbyterian Church. His wife followed several years later, and the two embraced Swedenborgianism, sometimes referred to as the “New Church” or the “New Jerusalem.” In this commitment, he followed his cousin, Dr. John J. Cabell of Lynchburg, who had been one of the first in Virginia to become a follower of the ideas of Swedenborg. Cabell took to the sect warmly and used his intellectual powers to advance its interests. He wrote several articles for the New Jerusalem Magazine in 1840-1842 and for the New-Churchman throughout the 1840s. His most famous work on behalf of his chosen church was his “Reply to Dr. Pond,” composed in 1848 to combat the criticisms of a Presbyterian clergyman. His “Reply” received notice not only from denominational organs, but from the New-York Tribune as well.

Following the death of his wife, Anne Cabell, in 1862, Cabell remarried in 1867 to another member of the “New Church,” Mary M. Keller, of Baltimore. Following her death he moved into the home of his son-in-law, R. Kenna Campbell, in Bedford City. From thence he passed from this world in September 1891.