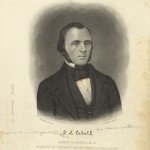 James L. Cabell, born in 1813 to Dr. George Cabell, Jr. (1774-1827), followed his father into medicine and his uncle, Joseph C. Cabell, to the University of Virginia. At a young age, he was already pursuing both dreams with an unusual passion. Uncle William H. Cabell, former governor of the state, wrote of his nephew in 1829, “He is the finest boy I ever saw…In returning home from parties, I have frequently found him at his studies at twelve or one o’clock at night. I think he bids fair to be one of the cleverest men in the country.”

Cabell did not disappoint. He attended the University of Virginia from 1829 to 1833 and, during the course of those four years, enrolled in at least one course in each one of the University’s eight schools, viz.: Ancient Languages, Modern Languages, Mathematics, Natural Philosophy, Chemistry, Moral Philosophy, Medicine, and Anatomy & Surgery. In 1833, he became one of the first students to receive the Master of Arts degree from the University , at that time the only degree granted by the school and contingent upon satisfactory completion of all of the coursework in any three schools. He graduated from the University of Maryland Medical School in 1834, then traveled to Paris to study still further. An invitation to teach in his alma mater as the prestigious Professor of Anatomy, Physiology, and Surgery interrupted Cabell’s European study and prompted him to return to Charlottesville for the 1837-1838 session.

Though some expressed initial skepticism with Cabell’s appointment and publicly wondered if he owed his position to the nepotism of Board Member Joseph Carrington Cabell, students and faculty members admired Cabell for his teaching ability, for his contributions to his chosen profession, and for his concern for the spiritual welfare of those around him. He raised interest in the School of Anatomy and Surgery to such a high level that in 1856 the Visitors elevated John Staige Davis to the Professorship of Anatomy and Materia Medica, giving Cabell a partner in his labors. One former student, Dr. Stephen Smith of New York, felt that Cabell’s determination to continuous train students as long as it took in order to prepare them for practice, combined with his demonstration of surgical techniques in the anatomical theater, made the University of Virginia’s medical training the most rigorous in the country.

One of Cabell’s tasks was to ensure a steady supply of “stiffs,” or anatomical subjects, a continuing challenge faced by all medical schools of the time. The University of Virginia’s needs were mostly addressed by robbing the graves of newly deceased enslaved and free African Americans during “anatomical excursions” conducted by UVA faculty and students or by “resurrectionists” who supplied corpses for a fee. Although grave-robbing was declared illegal in Virginia in 1848, the law was rarely enforced. Enslaved persons were tasked not only with preparing the anatomical subjects, but with disposing of the dissected remains as trash, denied the dignity of respectful burial. Thus, to paraphrase historian Harriet A. Washington, anatomical teaching at UVA represented for its African American community an extension of slavery and racial discrimination into eternity—even death could not free their bodies from white control.

Cabell acquired a reputation outside of the University as well. In 1859 he published one of his few books, The Testimony of Modern Science to the Unity of Mankind. With this volume, Cabell entered a vigorous national debate on the doctrine of races. Cabell’s anatomical researches, based largely on African American subjects, led him to argue that all races descended from a single ancestor, but they also were marshaled in support of the doctrine of black inferiority and to justify white supremacy. In 1878, he was elected first president of the National Board of Health. He was reelected to serve in that capacity for each year of that organization’s existence, until 1883. His work on this National Board, which included improving the nation’s quarantine procedures, culminated in an 1883 presentation before the American Surgical Association. Fighting the prejudice of the medical establishment, Cabell then urged the assembled surgeons to adopt improvements in hygiene in a paper entitled, “Sanitary Conditions in Relation to the Treatment of Surgical Operations and Injuries.”

As hard as he worked to prevent the spread of communicable disease, he worked harder to care for the spiritual needs of students at the University. He led a weekly Bible study, worked to establish a parsonage at the University for the school’s chaplain, and was the leader of the movement to build a chapel on grounds. His several eulogists agreed after Cabell’s death in 1889 that “the ennobling feature of his character was his deep and abiding religious faith.” A stained-glass window dedicated to his memory still adorns the chapel that he helped to build.