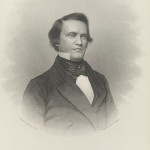 Born on the Cabell-family outpost near Lexington, Kentucky, called “Cabell’s Dale,” John Cabell Breckinridge earned fame as a public servant of his hometown, state, region, and nation. He graduated from Centre College, a Presbyterian school, in Danville, Kentucky and went for a brief stint at the College of New Jersey before returning to Lexington to study law. He studied both privately–under the guidance of Governor William Owsley–and at Transylvania University. He took his law degree in 1841 and began the practice of his profession, first in Iowa, then in Georgetown, but by 1845 back in his beloved Lexington.

Breckinridge answered his country’s call during the Mexican War and raced towards Mexico City with a regiment of Kentucky volunteers. Though he did not arrive in time to help win the war, he accrued the adoration of his fellow citizens with the way he handled himself on the campaign: “Of courage, talent and all the generous qualities requisite to make a noble soldier,” one Kentuckian wrote, “Breckinridge, of your City, is in an eminent degree possessed.” These grateful men elected him a state legislator upon their return home in 1849. The following year, 1850, Breckinridge was elected to the United States House of Representatives as a Democrat and began his career in the federal government.

After two terms in the House, Breckinridge joined James Buchanan on the Democratic ticket and became the youngest Vice-president in American history, elected in 1856 at the age of thirty-five. Throughout the escalating sectional conflict during the Buchanan administration, Breckinridge—who owned a number of enslaved persons and endorsed the institution of slavery as well as voluntary emancipation—expressed sympathy with Southern interpretations of the Constitution. He maintained, for example, those who held people in slavery should be able to carry their property in persons into any United States territory. But he also argued against secession and was extremely pessimistic about the viability of an independent Southern Confederacy. Notwithstanding these personal reservations, admirers from the Deep South convinced him to run for President in the famous four-way race campaign of 1860. Representing Southern (States-Rights) Democrats, Breckinridge received 18% of the popular vote and the 72 electoral votes from 10 Southern states and Delaware. His strong showing split the Democratic party in two and guaranteed a Republican victory.

Fleeing Washington in September 1861, Breckinridge volunteered in the Confederate Army and received from President Davis a commission as a brigadier general on 3 November 1861. He served throughout the war with distinction, including a stint from February-April 1865 as Secretary of War in the Confederate Cabinet. Following the Civil War, he fled to Europe through Cuba and did not return to his Kentucky home until 1869. He died there in 1875.