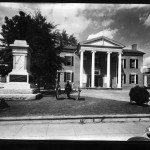 R. T. W. Duke, Jr. traveled widely from his home in Albemarle County, Virginia, but never for very long. Though his diaries are full of photographs and postcards from Europe and locales up and down the eastern seaboard, he always returned to Charlottesville and its environs–to his law offices; the home of his hero, Thomas Jefferson; his alma mater, the University of Virginia; and Sunnyside, his boyhood home.

Duke resided in Albemarle Country for his entire life, and served it in both appointive and elective capacities.

Duke, his father, and most of his children, attended the University of Virginia. As administrator of the Miller School Scholarship, Duke also contributed materially to its governance.