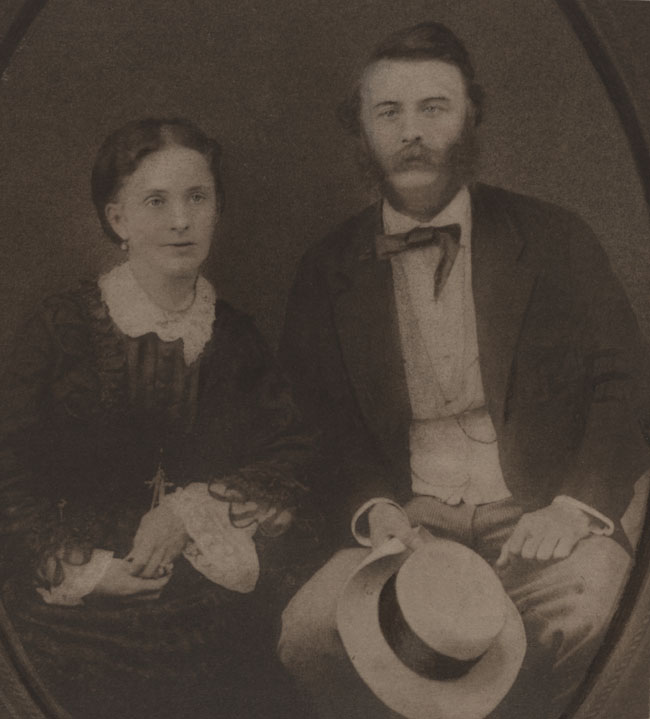 Lillian Gary Taylor, born Lillian Marie Gary, was the daughter of James Albert Gary and Lavinia Washington Corrie Gary. Mr. and Mrs. Gary had ten children, eight of whom survived to adulthood. Their firstborn, a daughter named Alberta Georgetta Gary and affectionately known as Daisy, was born September 20, 1858. Daisy died of scarlet fever at the age of five, on May 20, 1864, the year before Lillian was born. James Sullivan Gary II, the first of two sons for the Garys and named for his grandfather, was born November 17, 1860. “Brother Jimmie” was only nine years old when he died on December 27, 1869, possibly of appendicitis. Lillian’s earliest memories, as recorded in these journals, are scenes from Brother Jimmie’s funeral.

The Garys’ next eight children all lived into adulthood. Edward Stanley, who went by his middle name, was born July 26, 1862. Lillian Marie, born November 27, 1865, was the eldest of the seven sisters that followed. Pamelia Holton, called Minnie, was born February 13, 1867. Minnie was named after her father’s only sister, Pamelia Ann, who was affectionately called Aunt Minnie. Emma Lacy followed on July 5, 1868. Adelaide Louise was born April 22, 1871, and then Ida Catherine on November 6, 1873. “Catherine,” Lillian notes, “was Grandmother Corrie’s name” (26). On January 12, 1875, Jessie Augusta was born. Madeleine Lavinia was the youngest of the seven sisters; her birth date is not given in the journal. Throughout Memories Lillian refers to her brother as “Brother Stanley,” and fondly prefaces each sister’s name with the epithet “Sister.” See pages 15-28.

The Garys were careful in the instruction of their daughters, and raised their children to appreciate education. The girls both schooled at home and attended various schools for young ladies in Baltimore. Among these were schools lead by Miss Rossel, the Misses Gibson, and the Misses Hall. For a time Sister Adelaide and Sister Ida studied at Miss Randolph’s School for Young Ladies, which was run by Sarah Randolph, the granddaughter of Thomas Jefferson.

The girls’ lessons included knitting, sewing, arithmetic, writing, and poetry. Lillian especially loved poetry, including Sir Walter Scott’s “The Lady of the Lake,” and used to recite memorized passages to her sisters while they were getting ready in the mornings (which was not always their favorite thing to hear while making their beds). As a gift, her father gave her a lovely edition of Scott’s poems: “The volumes are in a box made from wood cut from Abbotsford. Each volume is bound with wooden sides laquerred [sic] in the plaid of the Clan where the scene is laid. I love them” (117-118). See pages 115-124.

Early in 1881, nearly all of the girls fell ill. Lillian and Sister Adelaide were kept upstairs, sick with scarlet fever, while Sister Jessie, Sister Minnie, Sister Ida, and Sister Madeleine (still just a baby) were downstairs sick with diphtheria. Sister Emma was the only daughter who did not get sick. To divert the sisters from their sicknesses, Lillian read stories to them while sitting at the top of the stairs (204). Lillian’s love of reading would later manifest itself in her impressive collection of best-selling American literature.

The girls also took dance and music lessons from private instructors. Their dancing instructor, Mr. Lehman, was a great favorite. He taught the young men and women of Baltimore society to waltz, polka, and square dance. Among the partners with whom the Gary girls learned to dance were Mr. and Mrs. John Prentice Poe’s six sons, who became football legends at Princeton University. Mr. Poe was a cousin of the author Edgar Allen Poe. The girls thoroughly enjoyed their dancing lessons, which at times could be livelier than one might expect. One afternoon, for example, a young man released a mouse onto the dance floor, and sent everyone scurrying and girls screaming! She remembers, “We all knew that Johnson Poe was the culprit; no one told” (99). Of the poor little mouse, Lillian says, “[H]is own idea was to run for safety, which I hope in the confusion, was attained” (98-99). See pages 93-100.