Alberton Mill. The Alberton Mill was founded by Lillian’s grandfather, James Sullivan Gary. The mill remained in the family until around 1940; even after the sale Stanley Jr. acted as the director for the company.

212 Lombard Street. Until Lillian reached the age of six, the Garys lived at 212 Lombard street. 212 Lombard Street was located across the street from the University of Maryland. Mrs. Taylor notes that the University building across from their old home “is still standing, one of Baltimore’s landmarks, and is still used, but the homes facing it have been torn down long ago” (Volume I, 2). Although she learned to love her new home at Linden Avenue, she was quite homesick when the family first moved. She remembers crying when they moved to the new house, and says, “I was homesick without understanding it. That has been a failing of mine.”

The Meadows. During Lillian’s early years, the family passed their summers at The Meadows, a country estate that Mr. Gary and the children loved. Here the children gardened, sewed, read, and learned to ride their ponies. The Meadows was sold to Aunt Minnie and Uncle Benton when the Gary’s moved from 212 Lombard Street to 1200 Linden Avenue, in the Bolton Hill area of Baltimore. 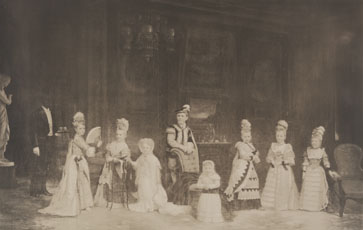 1200 Linden Avenue. On January 21, 1872, the Garys moved into a spacious house on Linden Avenue. The house had room for the Garys’ still expanding family, and contained beautiful gardens that delighted Mrs. Gary and Grandmother Corrie. In her journal, Lillian copied part of a news clip that described 1200 Linden Avenue as the “finest private residence in the city” (61). The parlor was a well-loved room, where the Garys entertained, suitors courted their daughters, and in which Lillian was married to Robert Coleman Taylor in 1900. This painting, commissioned by Mr. Gary, shows several of the Gary girls and some of their friends in the parlor, arrayed in the costumes of famous women including Lady Teazel, Mrs. Patrick Henry, and Mrs. John Hancock.

The Summit. Some time after the family sold The Meadows, Mr. Gary purchased The Summit, in Catonsville, Maryland, as a summer home for the family. Catonsville was a popular country retreat for Baltimore society, and many of the Garys’ family friends summered nearby, allowing for visits and parties to continue. Lillian remembers with fondness the dances that were held in the Catonsville library. She notes that there was “never a lack of beaux” to escort the Gary girls to these dances, but notes that her future husband was rarely able to attend: “My Bob Taylor seldom came. He was at the University of Virginia” (169).

The Brownstone. The newly married Taylors lived at the Bristol Hotel in New York City until they were able to find an apartment. Their first home in New York City was a brownstone apartment on the northwest corner of Fifth Avenue and 42nd street. Bob’s mother, Mrs. Sinclair, also lived in this building. The Taylors remained in this apartment from 1901 until 1912, although they were temporarily relocated when a fire spread from across the street and damaged their home in 1902. (Vol. III, pgs. 141, 180-85)

At the Novaro. In 1912, Lillian began searching for a new apartment. Although she had been told that it was useless to inquire at The Novaro, on West 58th and 59th street, since the building kept “a [waiting] list yards long,” Lillian decided to stop in one day. Using her southern charm, Lillian convinced the manager to let her see a soon-to-be-vacant apartment. She immediately declared that “it was perfect,” and Bob signed the lease the next morning. The Taylors adored their new home, and Lillian includes photographs of several of the rooms in Volume Four. (238-40; 286, 288, 290)