at the University of Virginia, from the Founding to 1878 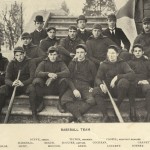 The gentleman in the back right, identified only by his last name of “Cabell,” served as assistant manager of the University of Virginia’s baseball team in 1896. His presence is a reminder that, although the list below runs only through 1878, Cabells have continued to play important roles in the University community. Family members have worn their affiliation with the University proudly; in the late 1880s, William D. Cabell helped to organize in Washington, D.C. the first national Alumni Association.

The following catalog of Cabell students at the University was derived from a comparison of Schele DeVere’s comprehensive list of University students through 1878 (which includes non-graduating alumni) with the known Cabell descendants recorded in R. W. Cabell’s 20th Century Cabells and Their Kin. Those with the last name of Cabell are corroborated in Nathaniel Francis Cabell’s, Cabellana, which contains lists of Cabells at U.Va. and at other schools. Though there are certainly omissions, the list below is still an extraordinary one. 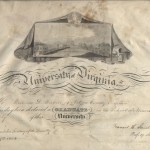 One of William D. Cabell’s several University of Virginia diplomas, this for graduating from the School of Natural Philosophy, in 1854. Originally, the component schools of the University granted degrees.

Name, with year(s) of attendance in parentheses: