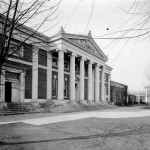 Following the destruction by fire of the Rotunda and its attached classrooms on 27 October 1895, the Board of Visitors launched an ambitious building program. They sought not only to rebuild the library in a fashion as stunning as the Jeffersonian original, but also to build a much-needed auditorium and to replace lost classroom space. Writing only three days after the fire, the Faculty recommended “That the Architect of the Board be instructed to propose plans for a new Academical Building to contain in its central member a public hall, designed in the horse-shoe or theatrical form…” The Board hired the New York firm of McKim, Mead, and White to complete the project. Architect Stanford White took a deep personal interest in the project, and he designed an elegant three-building cycle to close off the South end of the Lawn area, left open in Jefferson’s original design. The capstone of this project, the “Academical Building” of the Visitors’ design, was christened “Cabell Hall” in 1898, in grateful recognition of Joseph Carrington Cabell‘s services to the University.

The centerpiece of “Old” Cabell Hall [“New” Cabell Hall wraps around the outside of the 1898 building and was added in the 1950s] is its auditorium, designed, in the words of University historian Philip Alexander Bruce, so that “However small the audience, it would always present an aspect of more or less compactness by occupying the compartment or compartments exactly suited to its size.” When completed in 1898, what was termed the “public hall” held approximately fifteen hundred auditors: six hundred below the pillared railings, an additional four hundred between the railings and the back wall, and five hundred in the gallery. Following a series of renovations, including extensive changes in the late 1990s to guarantee handicap accessibility and improve the quality of the seating, capacity contracted to 851. A massive copy of Raphael’s “School of Athens,” a mural depicting the great philosophers of antiquity, has graced the inside of the auditorium since 1902. An anonymous alumnus commissioned painter George Breck to make the painting, in order to replace an earlier copy that had burned with the “Annex” in 1895. In 2000 as a conclusion to the renovations, the University added a new and complementary mural by Lincoln Perry outside of the auditorium, entitled “The Student’s Progress.” 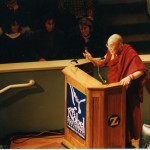 The restored Cabell Hall continues to host both musical events and visiting speakers. Nine Nobel Peace Prize laureates converged on the University in 1998 for a discussion with one another and with audience participants on how to “promote peace, human rights and reconciliation around the world.” Shown at left is His Holiness the Dalai Lama, speaking from the podium in Old Cabell Hall.

Additional Sources Consulted:
Philip Alexander Bruce, History of the University of Virginia (1921)
Minutes of the Board of Visitors (1895-1898)