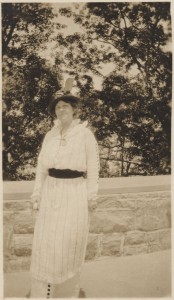 Though unidentified, the woman in this 1914 photograph is almost certainly Edith Slaughter Duke.

Edith Ridgeway Slaughter met R. T. W. Duke, Jr. for the first time in the spring of 1880. At the same time, Edith’s older brother, Charles Slaughter, became acquainted with Duke’s younger sister, Mary Willoughby Duke. Charles and Mary married in 1882, and Edith and “Tom” became engaged in that same year. Edith insisted on waiting until after her twenty-first birthday to wed, which the two finally did in 1884.

Throughout their courtship–and their long, fruitful marriage–Edith and Tom maintained a regular, heartfelt correspondence. Virtually every night that politics, business, or fraternal organizations took him away from their Park Street home, Tom wrote to the mother of his children. He typically addressed his letters to “My darling little wife,” and added on 6 January 1889, “What wouldn’t I give to be with you tonight, dearest?” 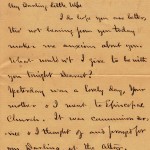 Still very much in love after thirty years of marriage, Duke poured out his affections in frequent missives, in verse, in his Recollections, in his diary, and elsewhere. He even purchased a journal in 1914 specifically for the purpose of recording the overflow of his affections. “I have determined to jot down a thought for you every day of this year,” he wrote. “Needless to say I think of you every day of my life.”

Edith Duke fully reciprocated her husband’s sentiments. Conscious that she had married young, she devoted extra energy to being the best wife possible. On 5 January 1890, she shared her hopes for the new year with her traveling husband. “I want to feel that your life is really better (not only happier) for my having lived … God grant that I may ever love you as you deserve and be a true help meet.”

Two years after his “help meet’s” death in 1921, Duke married a second time, to his wife’s sister-in-law, Mary Richardson Slaughter (“Maymee”). Maymee had married in 1890 Samuel Garland Slaughter, Edith’s brother and was a longtime friend of the family.