An Introduction to The Joseph M. Bruccoli Great War Collection

This essay is a combination of the foreword to “The Great War, 1914-1918,” the catalog of an exhibition of the same name held at the University of South Carolina November 1997-January 1998 and the introduction to The Joseph M. Bruccoli Great War Collection (Columbia, S.C. : MJB, 1999). The essay is reproduced here by kind permission of Matthew J. Bruccoli.

My father loved America and was intensely patriotic. He was proud of his battle medal with eight bars; to the end of his life he maintained that “They gypped me out of two battles.”

As company clerk at Camp Upton, Long Island, he was ordered to select truck-drivers for assignment to the French army. He included himself–although he had never driven a truck–because he wanted to see the war. My father was severely wounded in France and had a metal plate in his head. He refused to apply for a disability pension because he didn’t want what he considered “charity” for serving America: this was when he was still wearing his uniform because he was too poor to buy civilian clothes and was lining up for one day’s work.

My father was referred to as “The Boss,” and I addressed him as “Boss.” He was fearless and truthful; there was nothing he couldn’t do. These are two of The Boss’s laws:

“Always give to the Salvation Army. They were very good to the soldiers in France.”

“Never light three cigarettes on a match.” I saw him knock down a friend who was in the act of violating this law.

During my boyhood, I delighted in his war stories, and I read such Great War books as I could find. In graduate school I began collecting Great War novels, particularly those about aerial combat. My father was dyslexic–although he didn’t know it because the term was then unknown–and books were mysteries to him. He did not collaborate in my book-collecting, but he provided the money. When I showed him my acquisitions he asked, “Why do you buy old books?” Only new books were good enough for his son. 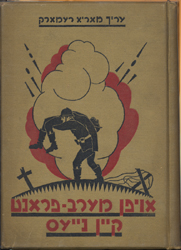 Cover, 1929 Yiddish edition of All Quiet on the Western Front

After The Boss died in 1965 I discussed my intention to build the Joseph M. Bruccoli Great War Collection with John Cook Wyllie, the University of Virginia Librarian–the best bookman I have known–whom my father respected. Mr. Wyllie and I intended that the collection would concentrate on fiction; but it was impossible to adhere to that rationale because so much nonfiction was available, especially after I began buying in Britain.

I was not an amateur, having served my apprenticeship under Mr. Wyllie and in bookstores; and I had built notable collections of American authors. But I was unprepared for the stimulation and challenges of this new field. There was so much splendid material, particularly in Britain. My original narrow rationale had to be abandoned because it was impossible to leave many out-of-scope items that I found. Even so, I shamefully recall the things I stupidly declined. Trench diaries were abundant in the Sixties; now they are virtually unprocurable.

Books are where you find them; they have no memory and can’t tell you how they got to where you found them. Yet I was surprised to discover that once I started paying attention, Great War material was everywhere–not just in bookshops and often in the wrong shops. I don’t mean to slight the British specialist booksellers whose catalogues provide irreplaceable reference tools: Paladour Books, Marrin & Sons, Charlotte Robinson, and Bertram Rota. But much of the most interesting finds came in American junk shops and what the Brits call jumble sales.

The Joseph M. Bruccoli Great War Collection provided my father’s posthumous benefaction to me. I have learned so much from working on it, and it brought a new cadre of bibliographical friends–as always occurs when commencing work on a new field. All those trips to London may not have been mandatory, but I justified them by bringing back books for the collection. For years the London trips meant reunions with my cherished friend Jane Kennerly–daughter of General Sir Hugh Simpson-Baike–who urged me to build a proper collection. Any excuse to see Freddie Zentner at the Cinema Bookshop is welcome. Sydney bookseller Nicholas Pounder donated superb Gallipoli material. Glenn Horowitz gave me more than he sold me. Charles Bailey shared in the acquisition of his extensive collection on the roots of the war. Scott Derks has served as chief scout. 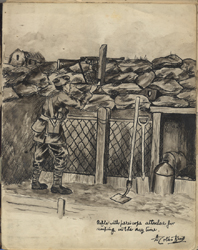 After twenty-five years the Joseph M. Bruccoli Collection holds some 4,000 items. Although there are smashing display items, it is a working collection for researchers. The collection cannot claim to be comprehensive because the subject is too large for one collector to embrace. But there are areas of strength, particularly literature. The Great War inspired moving fiction and verse. A generation of literary genius perished in the mud of France.

Nothing could be the same again after 1918. An American writer who was bitterly disappointed that he did not experience combat evoked the meanings of the Great War in a couple of hundred words:

“See that little stream–we could walk to it in two minutes. It took the British a month to walk to it–a whole empire walking very slowly, dying in front and pushing forward behind. And another empire walked very slowly backward a few inches a day, leaving the dead like a million bloody rugs. No Europeans will ever do that again in this generation.”

“Why, they’ve only just quit over in Turkey,” said Abe. “And in Morocco–”

“That’s different. This Western Front business couldn’t be done again, not for a long time. The young men think they could do it but they couldn’t. They could fight the First Marne again but not this. This took religion and years of plenty and tremendous sureties and the exact relation that existed between the classes. The Russians and Italians weren’t any good on this front. You had to have a whole-souled sentimental equipment going back further than you could remember. You had to remember Christmas, and postcards of the Crown Prince and his fiancée, and little cafés in Valence and beer gardens in Unter den Linden and weddings at the maire, and going to the Derby, and your grandfather’s whiskers.”

“General Grant invented this kind of battle at Petersburg in sixty-five.”

“No, he didn’t–he just invented mass butchery. This kind of battle was invented by Lewis Carroll and Jules Verne and whoever wrote ‘Undine,’ and country deacons bowling and marraines in Marseilles and girls seduced in the back lanes of Württemberg and Westphalia. Why, this was a love battle–there was a century of middle-class love spent here. This was the last love battle.”