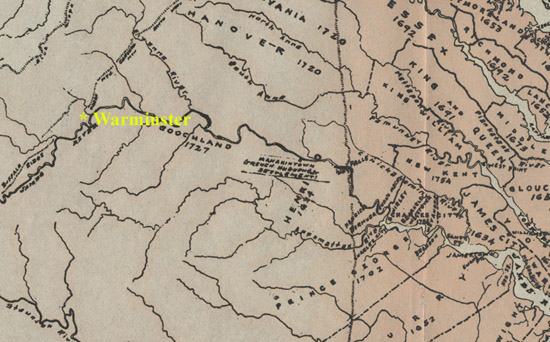 A map of the interior of Virginia in 1729, just after William Cabell had arrived, settled in Henrico County, and married Elizabeth Burks. His future home, Warminster (location of “Liberty Hall“), is shown in yellow. At that time, the location of the eventual Cabell homestead was in the newly created Goochland County. Excerpt from a map in Morgan Robinson’s Virginia Counties (1916).

Keeping track of the Cabells’ whereabouts–and therefore of the locations of their family estates and of the communities in which they lived–is rendered much more difficult by changing county boundaries. The eldest Cabell, for example, changed his residence from Goochland, to Albemarle, to Amherst County without moving an inch. After his death, his home moved again without him to Nelson County! Nelson County has remained stable since 1808, the epicenter of Cabell political and social activity. The table below documents the shifting county lines of “Cabell Country” in colonial and early national Virginia: