Documents Relating to the Military Career of Col. Nicholas Cabell 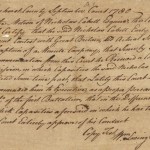 In September 1780, the Amherst County Court recommended Nicholas Cabell for the rank of Colonel in the County’s militia. The original and an 1855 copy of the resolution may be found in the Cabell Family Papers in the Albert and Shirley Small Special Collections Library at the University of Virginia (MSS 5084). 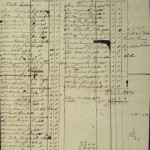