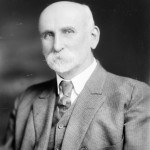 R. T. W. Duke, Jr., remembered his older brother, William R. Duke (“Willie”), as an aggressive playmate in his youth. Whereas R. T. W. confessed that he “found great delight in paper dolls and books & paint boxes,” Willie “was a great tease & a tremendous fighter with the boys of his age. He was noted for his grit and obstinacy in fighting to the last ditch.” So revered was Willie among his playmates that he earned the epithet “Conqueror” (Recollections I:15-16). 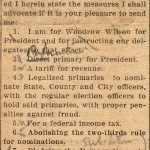 The older Duke brother soon transferred his pugnacity from physical to political contests. He served briefly in the Civil War, and afterwards became so frustrated with Radical Republican rule that he developed a political consciousness. As his brother Tom would later put it, “Many of the white gentlemen were disenfranchised. We were then District Number 1 & our Ruler was General Canby. My brother Willie began then to take much interest in politics tho’ he did not become a voter until the following year. I should say 1869” (Recollections II:108).

After one session at the University of Virginia’s Law School, 1882-1883, William joined his father and brother in the law firm of Duke & Duke. Like the other men in his family a staunch Democrat, he subsequently moved into elective office. He served in the House of Delegates as a representative from Albemarle and Charlottesville from 1897-1904. As a delegate, W. R. Duke was Chairman of the Committee on Schools and Colleges. In this capacity, he presided over a battle to reorganize the General Alumni Association of the University of Virginia, a measure which he strongly supported. Duke would later serve the University in a more direct capacity, as a member of the Board of Visitors, 1920-1924. 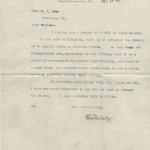 Occasionally the Duke brothers worked together on matters of mutual political interest. In the letter at right, dated 13 December 1897, R. T. W. Duke, Jr. addressed a letter to “Willie” suggesting that he sponsor a bill authorizing female notaries public. W. R. Duke evidently followed through on this recommendation, for he steered through just such a bill soon thereafter.