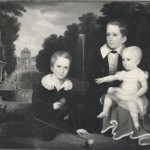 Henry Sigourney (b. 1855)
Three younger Sigourney children perished with their parents at sea in 1873.